Republican Mark Harris leads McCready by 905 votes in the 9th District, but the State Board of Elections and Ethics Enforcement has twice declined to certify the results. Evidence has emerged of an operation to collect absentee ballots from voters in Bladen County – and perhaps in neighboring Robeson County and other parts of the district. 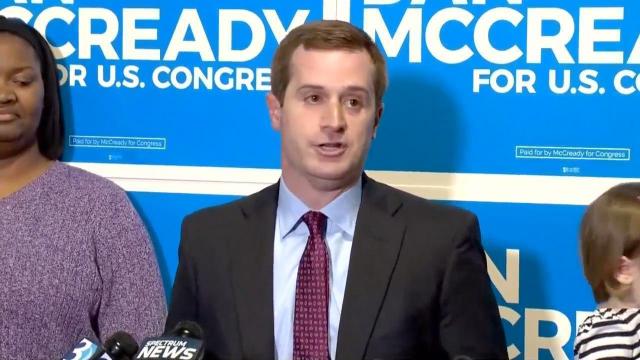 McCready's decision followed a day of twists and turns in the developing story:

"I didn't serve overseas in the Marine Corps just to come back home and watch politicians and career criminals attack our democracy," McCready said in a brief video posted on his campaign's Facebook page. "I call on Mark Harris to tell us exactly what he knew and when he knew it."

Pelosi said the U.S. House could take the "extraordinary step" of calling for a new election in the 9th District if the winner is unclear amid allegations of fraud.

The House Administration Committee has "full investigative authority to determine the winner," she said, and the House "retains the right to decide who is seated." Any representative can object to the seating and the swearing-in of another, she said.

"This is bigger than that one seat," she said. "This is about undermining the integrity of our elections."

"It's not just the Democrats who have a problem with how it went in North Carolina. The Republicans have a problem too because it affected their primary election – the fraud that exists there," Pelosi said.

Other Democrats also have called for a congressional investigation, and state elections officials already are investigating.

Republican state senators called Thursday for yet another investigation into the 9th District election, as well as into election irregularities going back years in Bladen County, saying there's a partisan taint on the state board's inquiry.

The senators said Gov. Roy Cooper should appoint a bipartisan task force, and they criticized past iterations of the board – including one appointed by Republican Gov. Pat McCrory – for failing to follow up on allegations that have dogged Bladen County elections for years.

"There's reason to doubt the capacity of the State Board of Elections," said Sen. Dan Bishop, R-Mecklenburg, who was flanked by the four other GOP senators who represent portions of the 9th District in the General Assembly. "Over the course of two or three administrations, they haven't gotten the job done."

Still, Bishop said he agreed with the state board's decision not to certify the 9th District election. The board's recent vote to investigate was 7-2, with two of four Republicans voting to proceed.

State elections director Kim Strach, who's leading the staff investigation, was appointed under McCrory. Her husband, Phil Strach, has been the lead attorney for General Assembly Republicans in a number of recent lawsuits defending an array of changes to North Carolina's election laws.

But Bishop said the board's partisan split – four Democrats, four Republicans and an unaffiliated member appointed by Cooper – is "disabling in its nature."

This is essentially the argument legislative Republicans have made as they fought Cooper the last two years over the board's make-up. They have repeatedly sought to lessen the governor's appointment power to the board and to create a new board made up of an equal number of Republicans and Democrats, arguing that the body that oversees state elections should be fully bipartisan.

The courts have thrown out a number of those changes, and the legislative majority and Cooper's administration are negotiating now over how the board will be composed in the future.

Ford Porter, a spokesman for Cooper, said GOP lawmakers should allow the current investigations to run their course before pushing for another one.

"Gov. Cooper believes North Carolinians should have confidence in the integrity of elections and allegations of fraud and tampering must be investigated. There are multiple ongoing criminal investigations, and legislators should allow investigators and prosecutors to follow the facts and take appropriate action," Porter said in an email.

Wayne Goodwin, chairman of the North Carolina Democratic Party, criticized legislation filed this week that would again restructure the elections board, saying it would "actively obstruct justice" by undermining the board and its investigation.

"Instead of supporting a thorough investigation into these very serious allegations, Republicans are attacking a state board that they themselves created in an attempt to obfuscate and distract from what's happening in the 9th Congressional District," Goodwin said. "Their behavior raises serious questions, perhaps most important, what are they trying to hide."

Last week, he noted, Republican lawmakers asked a court to keep the elections board in place to complete its investigation.

"Now, as the evidence of wrongdoing becomes overwhelming and mounts day by day, they no longer want this board to investigate – very curious," he said.

Harvesting absentee ballots would be a felony, and there are thousands of absentee ballots that were requested but never returned to local election boards to be counted. That is not evidence of fraud in itself, but the number of unreturned ballots in Bladen and Robeson counties has raised red flags.

The state board's investigation will wrap up some time between now and Dec. 21. The board voted to hold a public hearing on the matter by then.

Following the 2016 election, the state board voted to refer Bladen County issues to the U.S. Attorney's Office for the Eastern District of North Carolina. It's unclear whether an investigation is underway at that level, but U.S. Attorney Robert Higdon is a Republican.

His office recently charged 19 foreign nationals with voting in the 2016 elections and later issued subpoenas for voting records to the 44 counties in the Eastern District, including Bladen County.