“Call for Change: Band Together Against Racism" will be broadcast from 7 to 8 p.m. on WRAL-TV, on the radio on 95.7 THAT Station and live streamed in the WRAL News app, WRAL streaming apps for TV, and on Facebook. The event is a partnership with the nonprofit and the United Way of the Greater Triangle.

The artists have recorded performances at local venues including Durham Performing Arts Center and Lincoln Theatre to be played back. 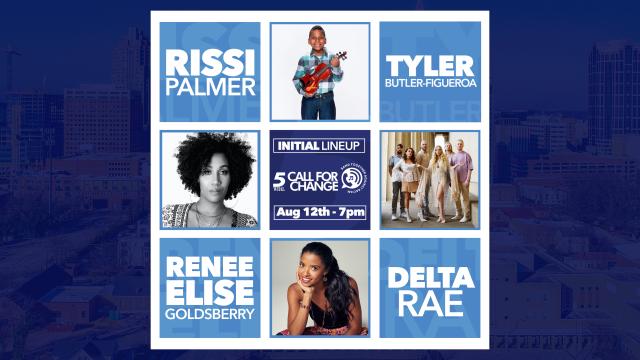 Special guest Renee Elise Goldsberry, who starred in the hit Broadway smash "Hamilton," will do a one-on-one interview with WRAL News as part of the event.

The telethon will raise money to support the Anti-Racism Community Fund, which aims to turn nationwide conversation around systemic racism into local action by providing resources to develop Triangle-wide community leadership and investing in anti-racism, systems-level solutions to poverty.

Band Together NC usually holds an annual concert dubbed the "Main Event." Previous headliners for that show have included The B-52s, Ben Folds and Hall and Oates.