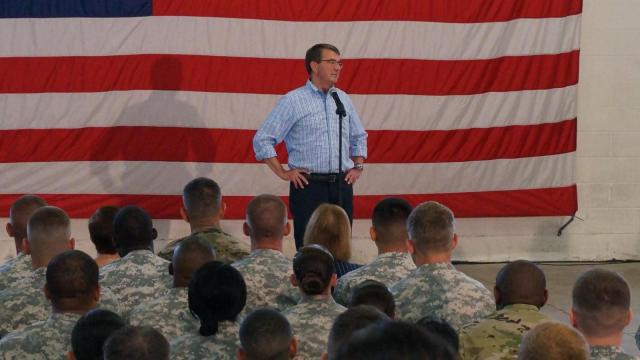 After thanking the soldiers assembled on the Green Ramp for their service, Carter said the Army was applying lessons learned in Iraq and Afghanistan in planning for the fighting force of the future.

"From the point of view of the proficiency and skill and dedication of you, there's no question. It was spectacular," Carter said. "This is the finest fighting force the world has ever known."

Questioned about the Army's plans to cut about 40,000 jobs over the next two years, Carter said he was certain that would remain the case.

A smaller force will require that the Army recruit and retain the best and brightest, Carter said, and that they’re well paid and have time for their families.

Asked about the threat from the Islamic State, Carter said the United States is resisting sending American troops and allowing local fighters to take the lead.

"The trick is to have a victory that sticks," Carter said.

Carter observed airborne operations Friday morning and had a chance to review some of the military equipment utilized by the special operations command before meeting with soldiers. He spent the afternoon observing other training activities on post.

"It's a once-in-a-life time opportunity," said PFC Joseph Velez-Cuevas, as Carter shook hands and thanked each soldier personally. He handed each a souvenir coin.

"To hear him talk was a blessing in itself. And now I've got a little bragging rights with this coin," Velez-Cuevas said.

Carter will be in Charlotte on Saturday to speak to the annual conference of the National Association of Counties.