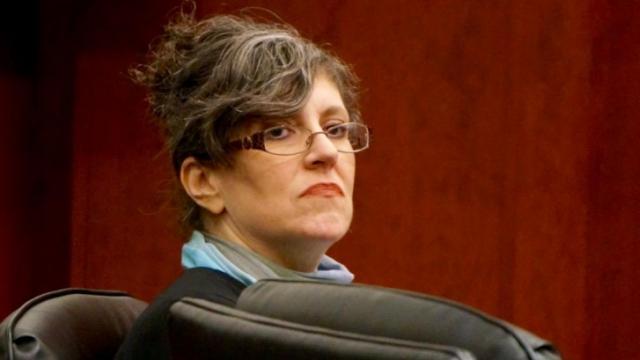 Raleigh, N.C. — The defense rested its case Thursday in the trial of former Wake County teacher Joanna Madonna, who is accused of murdering her husband in June 2013.

The jury will return at 9:30 a.m. Monday to hear the attorneys' closing arguments and begin deliberations.

Madonna, 48, testified on her own behalf over several days, telling jurors she didn't plan to kill her husband, Jose Perez, 64, but that she had to, to protect herself.

She described her late husband as a jealous man who lied to her about money and threatened to commit suicide anytime she tried to leave him. She told friends that sex with him sucked and touching him made her skin crawl.

On Thursday, prosecutors questioned Madonna about the day of the killing. She described a chaotic scene that began in the couple's car. She asked him to take a ride, she said, so she could ask for a divorce. During their conversation, she said, Perez faked a heart attack. When she pulled over to help him, he pulled out a gun and tried to shoot her.

"I went to grab it, and it went off, (hitting Perez)," Madonna said. "I was concerned that Jose was going to try to kill himself."

Perez was "bleeding pretty profusely," she testified. When she tried to drive him to a hospital, he faked another heart attack, forcing her to pull over again, she said. That's when he began attacking her a second time, punching her in the sternum, pushing her down and cutting her arm with a knife, she said.

"He got on top of me, and he was suffocating me with his weight," Madonna told the jury. "I was struggling for breath for a couple minutes."

"I got the knife and started swinging at him," she continued. "I just kept stabbing him until I felt like I could get up."

Fearing he might come after her again, Madonna took off her husband's shoes and threw them in the woods. She then drove home, cleaned the blood stains out of the car and began throwing away Perez's personal belongings, including his Bible, family photos and other items, she said.

Madonna's oldest daughter, Rachel Lopez, 22, testified that she heard her mother and stepfather leave the house and saw her mother return alone the night of the killing.

"She was on the phone. She was kind of sweaty, and she had a cut on her arm," Lopez said. "I asked her what was wrong. I could tell she was upset. She was just saying, 'It's OK. It's OK ... I asked her again, 'Mom, what happened?' She said, 'Jose got upset with me, and he took out his knife and cut my arm.'"

Lopez said she suggested calling police "in case Jose comes back," but Madonna said no and told her daughter, "It's OK. He's not coming here.'"

Madonna initially told investigators that her husband had moved to Florida, which she admitted Thursday was a lie.

Prosecutors say Madonna stabbed her husband a dozen times, leaving him to die in a ditch near Falls Lake, and then threw away her wedding ring.

In the two years she has been in prison since killing her husband, Madonna has sent letters to numerous people, including a man named Paul who walks his dog near the jail and waves at her from the sidewalk. Prosecutors read from several letters she sent to Paul, including some that were very intimate.

"Paul was a friend of mine, and I had a little bit of a crush on him," Madonna testified. "There's not a lot to do in jail other than write letters and think about the ones you love."

In one letter, Madonna offered to share her "warmth" with Paul if he would bond her out and said she often thinks about him at night, calling herself a "natural flirt."

Madonna also testified Thursday that she has written to several publishing companies to see if they would publish her life story in the hopes that it could help domestic violence victims.

"I will write anything that I can to help even just one woman," she said.

Police and sheriff's investigators testified earlier in the trial that they suspected Madonna had killed her husband from the beginning, in part, because of her reaction to the news of his death.

"She immediately covered her face, fell to the ground, on the ground sobbing," Detective Brian Gay, with the Wake County Sheriff's Office, said Monday.

When pressed though, Gay said he didn't see her shed any tears.

"It was odd because her husband's dead, and she's calling an attorney," Wake County Sheriff's Detective Darcy Weaver said. "That made me think perhaps she had something to do with it."

At issue in the case is whether Perez would have been able to physically assault his wife, as she claims. A doctor testified that Perez was in such bad health, it would have been "a real challenge" for him to attack her.

Dr. Robert Falge, a Raleigh doctor who treated Perez, said he had numerous health problems, including diabetes, heart disease, arthritis, chronic back pain and other serious ailments. His health was so bad, Falge said, that he could barely hold a fork or walk without assistance, let alone hold a gun and take part in a fight.