Deep fried or not? State Fair cuisine changing it up 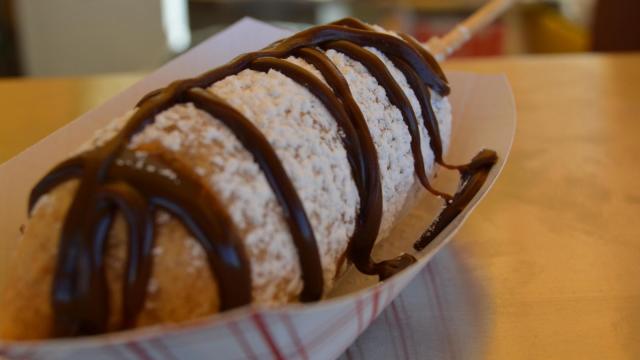 Raleigh, N.C. — I went to the N.C. State Fair media lunch this week excited for the customary exotic lineup of new treats we’ve all come to expect over the years: fried this, deep-fat that, chocolate-covered-whatevers. You know, foods that probably can’t be sold legally within 1,000 feet of a school.

Well I was wrong, and I’m not sure if that’s a bad thing, but I’ll let you decide.

All the old battered and fried classics will be at the N.C. State Fairgrounds this year of course, but the new products rolled out at the media lunch were noticeably more of what you might identify as “real” food, albeit in their more extreme and decadent forms which one would expect at the fair.

Dominated by seafood (no stranger to the deep fryer I suppose), sandwiches and dare I say normal desserts, the list of new delights seemed better characterized as “culinary” rather than the usual “crazy."

A few I tried:

Capt. Neill’s Seafood makes the trip to the state fair every fall from their location at the Outer Banks. This year their treats are a fresh crab dip with crackers and deep-fried cocktail crab claws. The crab dip dish was voted best item at the lunch by the media and is worth checking out.

From the always popular Ragin’ Cajun stand: a low country boil and crab cake fritters with chipotle butter. The Ragin’ Cajun is one of the classic state fair stands that only appears each magical week in October, so don’t miss it if you’re into that kind of thing.

La Farm Bakery brought a special chocolate raspberry whoopie pie, which is chocolate genoise cake, vanilla bean cream and raspberry filling. La Farm will be at the fair in the form of their food truck, and will have other dishes like a pulled pork barbecue sandwich with a peach chipotle barbecue sauce, along with some specialty loaves.

Woody’s Wings (yes that Woody’s from City Market in downtown Raleigh) brings a bacon pimento cheeseburger egg roll, which is everything you might expect from Woody’s famous bar food sans the NFL games on in the background.

You might notice that the foods above almost seem at home on a brick and mortar menu, not the list of wacky treats on the 2015 or 2014 fair new item lineups. So what does this shift to more mainstream foods mean?

Raleigh’s explosion of world-class New South cuisine and innovative foodie startups was eventually going to trickle down to the fair, and just like how American culture values what's on its menu more and more as the years pass (even sports stadiums are getting the hint), this change was naturally inevitable.

The important thing about shift though, regardless of how you feel about it, is that it’s authentic. This clearly isn’t McDonald’s or Domino's trying to sell you a salad straight out of a focus group. The innovators like La Farm Bakery and Baguettaboutit (which is serving up a chicken sausage baguette) are simply showing up to the party now and bringing their culinary discipline to the recreation side of cooking.

Some new items will go full on deep fried decadence this year. We didn't get to try them though.

Which is better? Old school or the new school style of fair food? I don’t know. But for the first time, you’ll have both options and will finally be able to decide for yourself.