Members of the media got a preview of the new items during a lunch at Dorton Arena in Raleigh on Monday.

The full rundown of new foods:

In addition to the food, the State Fair has partnered with the N.C. Horse Council to celebrate the "Year of the Horse" with more educational and entertaining equine events at the fair.

Powers Great American Midways announced that there will be several new rides hitting the fairgrounds this year. The Chaos will flip riders 360 degrees, while the Comet II is a roller coaster that features fast speeds and quick drops.

The Spin Zone Ride, a kid-friendly option, includes a bumper car with circles that spin around. And the Delusion flips riders high through the air.

New performers this year include:

Roaming acts will also include: Popping Penelope doing her balloon act in front of the Expo Center; stilt-walking by Zachari; Walking Tree Man; and Living Statues.

And make sure to check out the nightly fireworks show at 9:45 p.m.

On Wednesday, Oct. 22, the State fair will celebrate those who have served in the U.S. armed forces during Military Appreciation Day, sponsored by the N.C. Education Lottery. Active-duty service members, reservists, retirees, National Guardsmen and their dependents (ages 13-64) will be admitted to the fair for $5 at the gate that day. The first 3,000 people through the gates that day will receive a small American flag. At 11 a.m., there will a parade honoring the military followed by performances by the 440th Army from 12:30 p.m. to 5 p.m. at the waterfall stage. 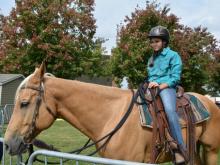 Head to the north lobby of Dorton Arena for a new exhibit honoring North Carolina’s involvement in World War I. Historians in uniform will be on hand to answer questions.

The Ag Today tent on the south side of Dorton Arena will show the latest in precision agriculture, including an unmanned aerial vehicle.

The Hunt Horse Complex will celebrate the Year of the Horse with a full schedule of events, including headline shows, a parade of breeds and free, five-minute riding lessons.

The N.C. State Fair is Thursday, Oct. 16, through Sunday, Oct. 26.  All grounds entertainment and exhibits are free with admission to the fair. Advance tickets for the fair are on sale now.