Declare the Strand Bookstore a City Landmark? No Thanks, the Strand Says. 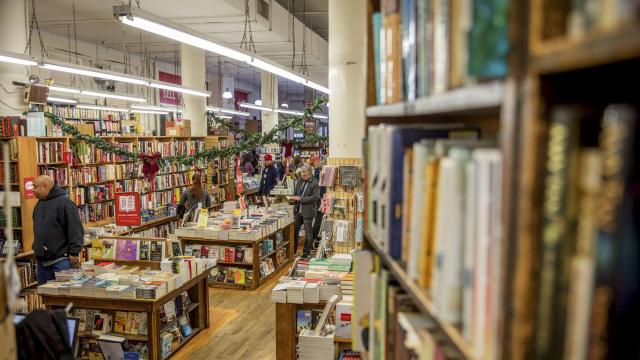 NEW YORK — Since it opened in 1927, the Strand bookstore has managed to survive by beating back the many challenges — soaring rents, book superstores, Amazon, e-books — that have doomed scores of independent bookshops in Manhattan.

With its “18 Miles of Books” slogan, film appearances and celebrity customers, the bibliophiles’ haven has become a cultural landmark.

Now New York City wants to make it official by declaring the Strand’s building, at the corner of Broadway and 12th Street in Greenwich Village, a city landmark.

There is only one problem: The Strand does not want the designation.

Nancy Bass Wyden, who owns the Strand and its building at 826 Broadway, said landmarking could deal a death blow to the business her family has owned for 91 years, one of the largest bookstores in the world.

So at a public hearing Tuesday before the city’s Landmarks Preservation Commission, her plea will be simple, she said: “Do not destroy the Strand.”

Like many building owners in New York, Wyden argues that the increased restrictions and regulations required of landmarked buildings can be cumbersome and drive up renovation and maintenance costs.

“By landmarking the Strand, you can also destroy a piece of New York history,” she said. “We’re operating on very thin margins here, and this would just cost us a lot more, with this landmarking, and be a lot more hassle.”

That the Strand could be threatened by its own preservation seems like a plot twist worthy of one of its books, she said: The very agency entrusted with preserving the city’s treasures is endangering one of them. Another rich twist, Wyden said, was that the move coincides with the announcement that Amazon — not exactly beloved by brick-and-mortar booksellers — plans to open a headquarters in Queens, after city and state leaders offered upward of $2 billion in incentives to Amazon and its multibillionaire chief executive, Jeff Bezos.

“The richest man in America, who’s a direct competitor, has just been handed $3 billion in subsidies. I’m not asking for money or a tax rebate,” Wyden said. “Just leave me alone.”

The commission’s case for landmarking the 1902 building calls the Strand “a center of literary life in Lower Manhattan” and “an internationally recognized bookstore and destination.” The commission’s designation report also cites the building’s Renaissance revival facade and its prominent architect, William H. Birkmire.

The building is one of seven in the area being considered for landmarking. Zodet Negron, a spokeswoman for the commission, described the seven structures as “very intact and architecturally significant buildings that represent an important era in the commercial development of the area south of Union Square.”

While most buildings considered by the landmarks commission wind up getting approved, Negron said, “It is not a given, and the public hearing, a critical part of the process, is an opportunity for the commission to hear other opinions.”

Owners of buildings with landmark status are in many cases barred from using plans, materials and even paint colors that vary from the original design without the commission’s approval.

Of the many prominent writers who frequent the Strand, several have sided with Wyden, including Art Spiegelman, Fran Lebowitz and Gary Shteyngart, who plans on speaking at Tuesday’s hearing.

Lebowitz said she supported Wyden partly because “I could never not be on the side of a bookstore.”

“Usually I’m on the side of the preservationists, but in this case, I agree with Nancy, because I know the Strand is a store, but it’s really a cultural institution that’s essential to the city,” she said. “And to put that” — meaning, landmark restrictions — “on top of a bookstore is just not fair.”

But Peg Breen, president of the New York Landmarks Conservancy, an advocacy group, said she believed the Strand’s concerns were unfounded.

“No one is doing this to hurt the Strand, or add difficulties,” she said. “They’re doing it to honor the building.”

Breen wants more buildings in the area to be landmarked, and hopes that designating the Strand’s building and the other six would pave the way, especially as a $250 million, 21-story tech training center is being developed near the Strand.

Worried that the project will ignite a wave of local development, preservationists have called for the landmarking of roughly 200 buildings south of Union Square.

The commission’s decision to choose only seven buildings for designation was a bitter disappointment, said Andrew Berman, executive director of Greenwich Village Society for Historic Preservation. He criticized the city for “cherry-picking” buildings that he said were not vulnerable to development and ignoring many others that were.

Wyden — who is married to Sen. Ron Wyden of Oregon, whom she met at similarly renowned Powell’s bookstore in Portland, Oregon — is a third-generation owner of the Strand, which stocks roughly 2.5 million used, rare and new books and employs 230 people.

Her grandfather Benjamin Bass opened the Strand in 1927 on Fourth Avenue’s “Book Row,” which was lined with nearly 50 bookstores. Her father, and Benjamin’s son, Fred Bass, took over the business and worked there until his death in January at age 89.

The family moved the Strand to its current location in 1957 and rented space for decades before buying the building in 1996 for $8.2 million to ensure survival amid rising rents, Wyden said. The city assessed the building’s value at over $31 million in January. Though landmark designation is often used to protect buildings from demolition or significant alteration, Wyden said she has no intention of selling to a developer, and is already restricted by existing zoning from further developing the building.

Of the building’s 11 floors, five are occupied by the Strand’s retail and office operations, with the other floors rented by business tenants, Wyden said.

While she would not divulge the bookstore’s finances, she said that she could make more money renting out the Strand’s five floors, but she loves the family business too much.

She accused city officials of trying to hurry the landmarking process, leaving her little time to prepare a defense, especially during the holiday rush.

“It’s our busiest time of year, and we should be focused on customers and Christmas, which is where we make our most money,” Wyden said. “But they have no sympathy for that.”