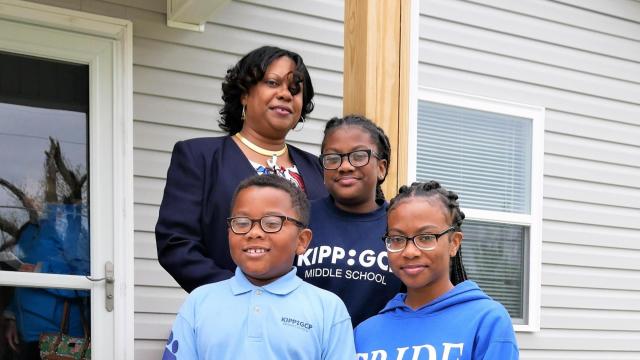 Weldon, N.C. — "We closed on this home at 10 o'clock this morning," Rochelle King told a crowd of Habitat for Humanity volunteers who had gathered at noon April 17, 2018, for a dedication in Weldon.

Applause and a light cheer went up.

"It's been a long and complicated journey, but we are here, thank the Lord," said the executive director of the Halifax-Northampton Habitat affiliate.

Then she turned to Shamera Williams and three of her four children, who were standing beside her in the home's bright kitchen.

"We're thankful for you," she told the family.

"I'm thankful for you," Williams replied.

The new house is a bright spot in the neighborhood. Weldon is a town of about 1,600 souls in Halifax County, close to the Virginia line. It benefits from the growing affluence of the Lake Gaston and Roanoke Rapids Lake area which has attracted retirees in recent years. But it suffers, like so many rural areas across the United States, with few jobs to offer an aging population. The Williams family's home is just a few minutes from the drone of Interstate 95 and smack up against the rumble of freight trains rolling through the rural landscape.

The house being dedicated stands out. It's part of the State Employees Credit Union Foundation's Mountains-to-the-Sea Challenge to build or renovate a Habitat for Humanity home in each of North Carolina's 100 counties. The SECU Foundation has put up $10 million for construction. Once the homeowner assumes a zero-percent-interest loan from the Habitat affiliate, the loan is then assigned to SECU, which pays the affiliate for the loan amount so that another home can be built.

"It's heartwarming to see people come together" to do good work, said Weldon Mayor Julia Meacham, who attended the ceremony.

For Williams, who is the office manager at KIPP GPC elementary school in Gaston, it was an emotional day.

"I don't know what to say," she told the crowd. "It's an opportunity to be a homeowner. We all appreciate everything everyone has done. And it doesn't stop here."

"We are overjoyed," she continued, turning to her children. "It probably doesn't show in their faces, but trust me, if you walk by and you hear them they will be happy."

King then lit a candle and anointed with oil the foreheads of Williams and her three children who were at the ceremony: Destiny, a high school sophomore; Jessica, in fifth grade, and Jayson, a third-grader.

Her eldest child, Aviana, could not make it home for the celebration; she is a sophomore at the University of Southern California, studying environmental science.

King knew Williams at Wildwood Nursery, where she was working. Her family was in Section 8 housing, and King suggested that she apply for a Habitat home.

The process took about two years. In the meantime, Williams was diagnosed with lupus, which meant she could not be exposed to the sun, making work at the nursery hazardous.

"The opportunity to be office manager at the school came up," she said, which was perfect for her.

The decision to seek a Habitat home also gave Williams the chance to give her children a teachable moment.

"I want to do things as an example to my children. Give them goals; show them that everything is achievable once you set your mind to it."

The experience has strengthened her faith. Williams read a verse from the Book of Joshua: "As for me and my household, we will serve the Lord." 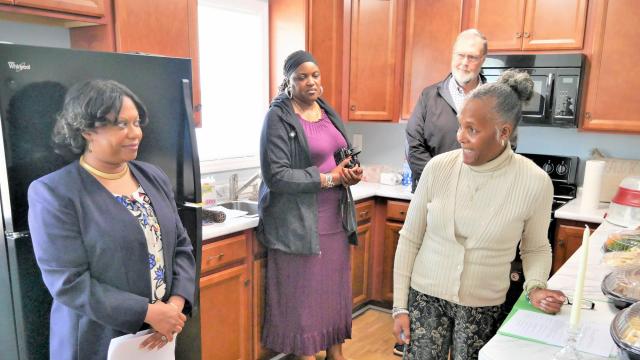