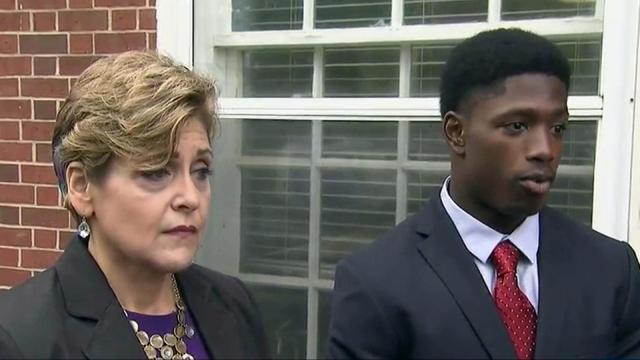 Authorities haven't charged Allen Anthony Artis with a crime, but Delaney Robinson, a 19-year-old sophomore from Apex, swore out warrants against him two weeks ago in front of an Orange County magistrate on misdemeanor charges of sexual battery and assault on a female.

Robinson said she took that step because she was frustrated by the lack of action in her case by UNC-Chapel Hill administrators and the criminal justice system after she alleged that Artis, 21, raped her in an apartment at the Ram Village complex on Valentine's Day.

Orange County District Attorney Jim Woodall has said the case remains under investigation. He accompanied Robinson and her attorney, Denise Branch, into court on Thursday.

"We are pleased with the actions Mr. Woodall and his office have taken since Ms. Robinson had the courage to come forward," Branch said in a statement. "Ms. Robinson remains resolute in her pursuit of justice."

Artis, linebacker from Marietta, Ga., has been suspended indefinitely from the football team. His attorneys said Thursday they don't see how he can get a fair trial.

"He’s been crucified for no reason," defense attorney Kerry Sutton said. "We have a mugshot of a young, black man athlete. So, how do you think people are feeling about this case right now? Of course, they’re condemning him in their minds."

Artis has denied the rape accusation, saying any sex he had with Robinson was consensual.

Robinson told police that she thought she might have been drugged earlier that night, but Sutton said all of the witnesses in the case have said they didn't think Robinson appeared incapacitated.

"He is not guilty of these charges, and we are going to show that," Sutton said. "Everyone will say, 'Oh my gosh, what have we done? We’ve ruined another man’s life.'"

Sutton criticized Robinson for obtaining warrants on her own and then holding a news conference about her case, instead of allowing law enforcement and Woodall's office to complete their investigations.

"This has been manipulated, sadly, poorly, horrifically," Sutton said. "It’s not him who put us here. It’s someone who wanted the process to go faster. That’s not the way it works."

Artis said he just wants the truth to come out so he can get on with his life.

"I wish (people) would get to know me for me before coming to a conclusion about me, who I am as a person," he said.