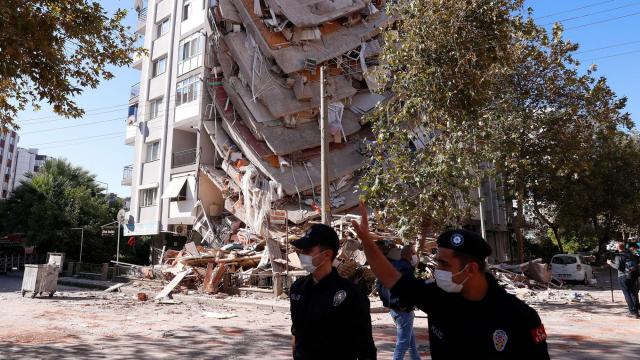 Rescue efforts to find any remaining survivors under the wreckage of buildings in the city of Izmir, in western Turkey, have continued into a third day.

Health Minister Fahrettin Koca said Sunday there was "no clear number on how many people are still under rubble. Hard to give a number. There is an estimation, but I cannot share."

Turkish President Recep Tayyip Erdogan said Saturday that 103 people had been rescued from the debris so far.

A total of 20 buildings were seriously damaged in Izmir by the tremor, according to Izmir Mayor Tunc Soyer, the majority of them in the middle-class Bayrakli district.

At least 962 people have been injured in Turkey, 219 of whom are still being treated at hospitals, the country's disaster agency said Monday.

More than 900 aftershocks have been registered since the initial quake, 42 of them with a magnitude over 4.0, according to the agency.

Greek authorities said Friday that two teenagers, a boy and a girl, died on Samos after a wall collapsed on them.

The earthquake also triggered what authorities called a "mini tsunami," causing streets to flood Friday in parts of Turkey's wider Izmir province, as well as on Samos.

The United States Geological Survey (USGS) measured the tremor's magnitude at 7.0, while Turkish authorities said it was 6.6. The quake struck 14 kilometers (8.7 miles) northeast of the town of Néon Karlovásion on Samos, the USGS reported.

It hit at a relatively shallow depth of 21 kilometers (13 miles), the USGS reported, making its impact powerfully felt at ground level around the epicenter.