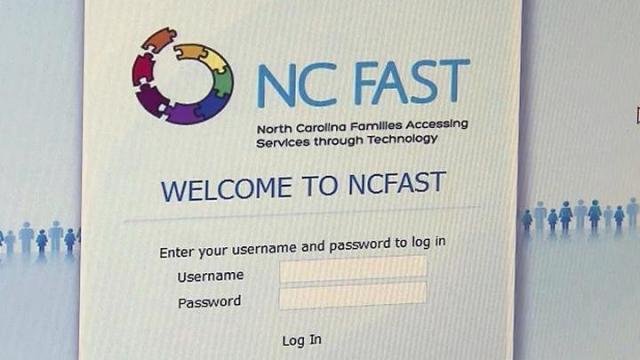 Commissioner Ray Trapp said Thursday that officials "have a plan in place that we're pretty sure is going to work."

About 100 people will work for the next five days to meet the Monday deadline set by the U.S. Department of Agriculture for the state to clear an ongoing backlog in processing applications for food stamps, Trapp said.

About half are county staff. The rest will be state workers, contractors and workers in other counties' social services offices on loan to Guilford County.

The applications had never been entered into the state's benefits management system, NC FAST, so they did not appear on the state's tracking records. Trapp said the problem was actually discovered by a state worker who had come to the county office to help with NC FAST problems.

Secretary of Health and Human Services Aldona Wos said she was told about the new cases only Wednesday morning, shortly before a legislative oversight meeting. At that time, she didn't know the number of cases outstanding but told state lawmakers that DHHS staffers were on the way to the county to assess the situation.

The USDA, which funds the food stamp program, has threatened to withhold $88 million in administrative funding for the program, also known as SNAP, if the backlog isn't erased by March 31.

Wos said the state has been on track to meet the deadline, with around 500 cases to clear by Monday. But the additional Guilford County cases could put that in jeopardy.

"These were cases that were never even – we were never even informed that there’s a potential of these cases that haven’t even been entered," she said Wednesday. "We rely on the counties to let the state know what their backlog is even before they work with NC FAST."

Much of the previous backlog of tens of thousands of cases was due to technical problems with NC FAST. Wos said the system wasn't the problem in Guilford County.

"DHHS senior leadership is continuing to work with county officials to address this issue and has reached out to surrounding counties for additional help. DHHS will put forth every effort to assist Guilford County as they approach the USDA’s March 31 deadline," DHHS spokesman Kevin Howell said in a statement.

Trapp, who is also on the county Department of Social Services board, called the problem "embarrassing and unacceptable" and promised a full investigation into the cause.

"Nowhere else in the state has the backlog that we have," he said.