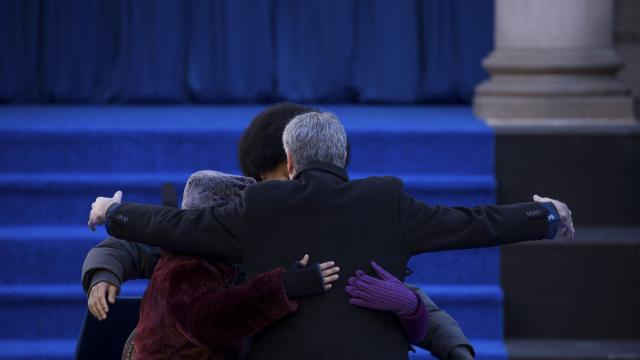 NEW YORK — Mayor Bill de Blasio took the oath of office Monday, a frigid New Year’s Day, to begin his second and last term, with broad promises for building a fairer city and with his sights already fixed beyond the five boroughs.

He was sworn in by populist senator and leftist icon Bernie Sanders, I-Vt., in an outdoor ceremony that was truncated because of the cold — a youth chorus and the city’s youth poet laureate were eliminated from the program, and de Blasio said that he shortened his remarks out of consideration for his shivering audience. The temperature was in the teens, under a powder blue sky, with a sharp wind that picked up once the mayor began speaking.

Several hundred people, including other elected officials, watched the ceremony in the plaza in front of City Hall, although empty seats were scattered throughout — a contrast to four years ago when thousands packed de Blasio’s first swearing in (the weather then was warmer).

Aside from Sanders, the political star power was significantly reduced from de Blasio’s first inauguration. Then, he was sworn in by former President Bill Clinton and other attendees included former Secretary of State Hillary Clinton, Gov. Andrew M. Cuomo and activist and performer Harry Belafonte. None of them were there Monday.

Sen. Chuck Schumer arrived late, traipsing down the carpeted City Hall steps and squeezing past Sanders and other dignitaries in the middle of de Blasio’s speech. (Schumer was coming from the inauguration in Mineola of new Nassau County Executive Laura Curran, which the governor also attended.)

De Blasio, 56, was accompanied by his wife, Chirlane McCray, and their children, Chiara and Dante. Former Mayor David N. Dinkins, 90, was also present, the only dignitary who was given his own space heater.

Public Advocate Letitia James and Comptroller Scott M. Stringer, both Democrats like de Blasio, were also sworn in for their second terms and both gave speeches — perhaps with an eye toward the 2021 mayoral race. Sanders, who wore a bulky green parka and no hat, appeared to grow colder as the ceremony wore on, hugging himself with crossed arms, his coat drawn up around his chin and a blanket over his knees.

“Now, by Vermont standards this is a warm and pleasant afternoon,” Sanders said at the start of his speech, provoking laughter from de Blasio, who has engaged in an increasingly open bromance with the progressive senator.

The crowd cheered as enthusiastically for Sanders as it did for de Blasio. Some people said they came because of Sanders. Those who attended found a color program, a packet of hand warmers and, in many cases, a blue synthetic blanket, on folding chairs. Some people congregated around portable heaters like those used in outdoor restaurants.

The mayor’s choice of Sanders to administer the oath seemed to signal his intention to use his second term — even more than his first — to build a national profile for himself (speculation about that was also fueled by a trip last month to Iowa, the cradle of presidential ambitions). And Sanders obliged, giving a six-minute speech in which he contrasted the “bad news” coming from Washington with the “good news” in New York, embodied in de Blasio’s progressive policies.

“Instead of pandering to billionaires we have a government here which has chosen to listen to the needs of working families,” said Sanders, who in 2016 made a bid from the left to become the Democratic Party presidential nominee, losing out to Hillary Clinton.

He then led de Blasio in the oath of office. McCray held a Bible that had belonged to Mayor Fiorello H. La Guardia; de Blasio, with no hat and in a dark wool topcoat, rested his left hand on the Bible and raised his right hand. After completing the oath he hugged Sanders and his family.

De Blasio thanked voters for giving him a second term and said that he would proceed to describe “the essence of what the next four years will be like.”

But the essence was short on detail and seasoned with intimations of national scope.

“Something big is happening in New York City, something new, something different, something that has begun a new progressive era in this city’s history,” de Blasio said. “Something is being done here that matters to all of us, but is also being felt far beyond our borders.”

He went on to lament the city’s vast disparities in income, pledging to make the city more just for working people, with more affordable housing and good paying jobs.

“The true owners of this beloved place are not the big landlords and developers, not the titans of Wall Street and the 1 percent,” he said. “The deepest, truest stakeholders of this town are the people who do the work, who every day make this city come to life but have too often not reaped the rewards.”

In a speech that lasted 13 minutes and included several references to the cold, de Blasio reached for inspirational eloquence. He cited Abraham Lincoln’s metaphor of a house divided, using it as a symbol of both income inequality and of the country’s political factionalism.

“In this heyday of hatred, this new dawn of divisiveness, we in our city refuse to be dragged down to a place we know is beneath us,” he said.

He did not name President Donald Trump — no speaker did during the 69-minute ceremony — but he made clear reference to the president’s policies, pledging to keep New York “a beacon to our nation and the world.” In the audience was David Pecoraro, who said he had attended de Blasio’s previous inauguration and described himself as “a big, big, big, big, big Bill de Blasio fan.”

“There haven’t been very many politicians in my life where I felt like I was voting for someone rather than for a party or against someone,” said Pecoraro, 57, a retired schoolteacher. He praised de Blasio’s expansion of prekindergarten classes and a two-year rent freeze on rent-stabilized apartments. “When did that ever happen?” he said.

Pecoraro said that his wife, Clara, had stayed home because of the cold. “She’s the sane one,” he said. “I’m not. But part of being a fan is being a fanatic.”