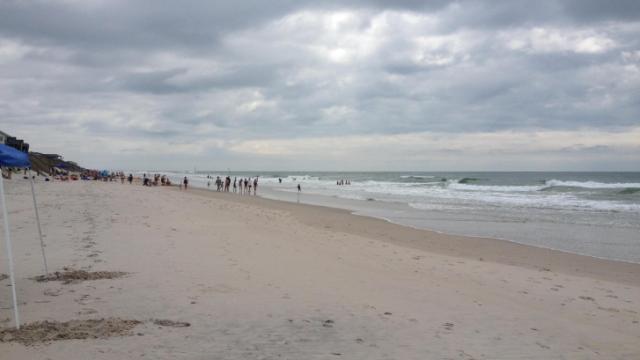 Many a Triangle resident has said something like this before when asked about what's great about this region: "Well, you know, it's just so close to the beach and mountains. You get the best of both worlds!"

Now to actually explore both of those worlds. I certainly have spent time in both, but not enough (considering the proximity). I've been to Asheville and lived in Mount Airy. I've both vacationed and covered hurricanes on the Outer Banks. And I've taken day trips to the beach - Wrightsville Beach - several times.

That's where we were headed a few weeks ago until a friend mentioned that her family usually picked Topsail Island for their day trip beach destination. Parking isn't as much of a hassle and free, she told me. It's also not that much farther from Raleigh than Wrightsville Beach, clocking in at around 2 hours and 15 minutes or so.

But before my husband, kids and I left for our day at the beach, I checked in with Monique Baker, Pender County tourism director, and Allan Libby, Surf City tourism director. Let me take a moment to mention Libby, who was so specific with his tips that my husband and I started calling the trip the "Allan Libby Experience."

Our trip began at about 8 a.m., one Saturday morning in July. We headed down Interstate 40, knowing, thanks to Libby, that if we needed more breakfast, we could stop at Exit 364 where there are plenty of fast food options.

We crossed the swinging bridge into Surf City around 10:30 or so. We knew we wanted to get on the island before 11 a.m., as recommended by both Baker and Libby, to avoid the long queue of cars that starts lining up as rentals open for the next week. We also knew, thanks to them, that the bridge opens at the top of the hour to boat traffic. So we wanted to avoid that wait, too.

We breezed right in.

Libby let me know that a wedding was planned that morning so parking at the visitor's center would be closed to the public. He pointed us north a few blocks to the public access point at Wilmington Avenue. Here, two churches open up their parking lots to the public when they are not being used for services. About a block away, on New Bern Avenue, there's another access with a handful of parking spaces but, most importantly, restrooms. There are showers to rinse off at both entrances.

The next four hours are a blur of big waves, boogie boarding, sand castles and a picnic lunch. It was a wonderful day on a beach that was busy, but not too crowded. The tide was high, not leaving a huge amount of sandy beach area to play on. But we're not a lay around kind of beach family. We all had a blast playing in the waves, taking a few moments to collect shells and eat lunch.

As recommended by Libby, we packed up around 3:15 p.m. or so, rinsed off and headed to the new Karen Beasley Sea Turtle and Rescue Rehabilitation Center, which sits just over the bridge on the mainland.

The center, which opened for public tours in June, works to rescue and rehabilitate injured sea turtles. It also protects and conserves the ones on the beach.

Visitors can take a tour of the hospital, learning from volunteers all about the turtles in its care. This isn't a huge facility, though several dozen turtles were recovering in big blue plastic tanks. We learned how some of them were injured from volunteers. We spent about 30 minutes here, but learned a lot about the delicate lives of turtles. Admission to the museum is $5; $4 for seniors and military; and $3 for kids.

We ended our day at Sears Landing, a seafood restaurant on Roland Avenue just before the bridge onto the island. As you may have guessed, Libby recommended it. And, as I was celebrating a birthday, we decided to splurge. The menu includes kids' options, though my nine-year-old went with the Mahi Mahi sandwich on the regular menu and I shared my platter of grilled scallops and shrimp with my younger daughter.

We sat at our table with a view of the docks, watching the boats come in and out. It was the end to a lovely day.

We toyed with the idea of going back on the island for a final look at the beach and some ice cream, but the line at the bridge was extremely long and crowded. And it was getting late.

When we go back, I'll investigate the public beach access with a large playground and restrooms at the Pender and Onslow county lines, still north of the Wilmington Avenue area where we parked. I'll get some ice cream from Island Delights. And we'll bring home some fresh seafood from Surf City Crab.

I'd love to hear about your favorite spots on Topsail Island and other beach day trip destinations.

Go Ask Mom features places to take kids every Friday. For more, check our posts on parks and playgrounds and Triangle family destinations. This post is part of an occasional summer series on road trips.