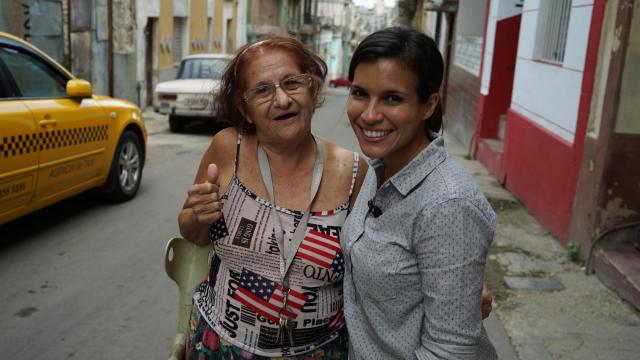 Hours before we departed for Miami, I met with Alfonso Sama. He is the owner of Carmen’s Cuban Café in Morrisville. He grew up in Cuba and as a teenager, he worked in a cigar factory in Havana. My goal was to try to find his old home and workplace, if time allowed.

I dedicated my day to it today.

I showed Yoyi, Andy’s business partner, a map Alfonso had drawn. He mapped out where he worked and once lived. We found some old co-workers still in the area and then headed to his old home.

We had almost given up on finding any old neighbors. I was in the taxi with my seatbelt already buckled, when Zac brought my attention to an older woman coming out of her home. I approached her.

Her name was Caridad. I explained what we were trying to do. She immediately began to tell us her life story. She was born in the home where she lives now. She has several brothers and sisters, but they have all left the area. Most of the neighbors are new. The old pharmacy was once next door.

She was sharp. At one point, she told Zac she knew a bit of English because she had spent some time in Canada. She proceeded to prove it by counting to 10 in English.

We showed her pictures of Alfonso. She didn’t immediately remember him. I showed her the map, and she confirmed we were indeed in the right place. Given her history in the area, I knew she had to have crossed paths with Alfonso at some point.

Cell phones are not as prevalent in Cuba as they are in the U.S. But I had managed to get one for our visit and decided to call Alfonso to connect the two. I thought it might help jog her memory. Sure enough, it did. A few minutes into the conversation, she said, “Yes, of course I remember you.” It was the moment of the day.

She invited us in for coffee. I couldn’t accept knowing she had very little for herself. We declined the offer for coffee, but took her up on her offer to go inside her home and chat.

You could tell her home was once marvelous. It was actually quite spacious compared to the others. The tiles on the floor were gorgeous. Yet buckets collected water from leaks in the roof. The walls had cracks, and the paint had mostly peeled off.  I wondered what the original architect of the building would say if he or she saw it today.

She had a few cats, even a turtle. They keep her company, she told me, as she continued to tell me about her life. It was drastically different from Alfonso’s life. Here are two individuals born in the same place and raised on the same street. One left Cuba. The other stayed. Alfonso was now a grandfather running his own business. Caridad was alone in a home filled with memories, and not much else. Like the others, her fridge was empty. Yet somehow, she still smiled and laughed a lot. She still seemed so full of life. She was resilient, like so many of her fellow Cubans.