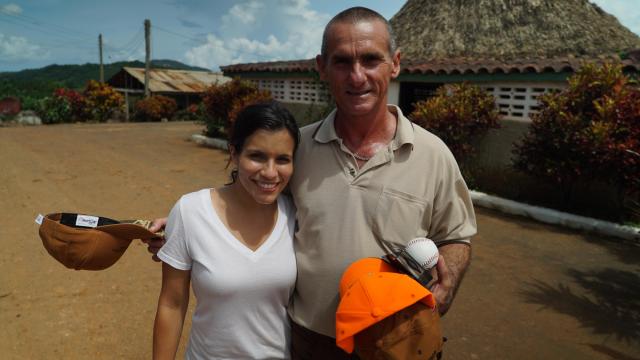 We stayed up until about 1 o’clock in the morning writing and editing our piece about the delegation’s first full day in Cuba.

Despite the exhaustion, I was excited. It felt like field-trip day.

After a crash course in the agriculture world of Cuba yesterday, we got to actually go and experience it all.

We met the leader of one of the state-owned cooperatives, a coffee farmer, and a tobacco farmer. This was probably my favorite part- watching farmer to farmer interactions. They talked about crops, soil, climate, etc. There wasn’t a single mention of politics.

The tobacco farmer’s name was Ivan. Through a translator, he explained what it was like to grow tobacco in Cuba. He showed the delegation how to make a Cuban cigar and offered them a taste.

It was a big day for Ivan. He was getting power in his home for the first time

The delegation seemed to have the most fun, not surprisingly, in the fields.

Beth from NCD was digging in the dirt to feel the difference. At one point, I noticed she even smelled it. I enjoyed watching her explore and compare and contrast between Cuba and North Carolina.

There was much that was lost in translation.

One of the guys gave the farmer from the cooperative a bright orange hat with his organization’s logo and explained that would be a good hat for hunting. But In Cuba, hunting is illegal.

Somehow in the big picture of it all, they all seemed to understand each other.

Beth explained it was because they can all relate. They’re all trying to do the same thing—feed their communities, feeding the world.