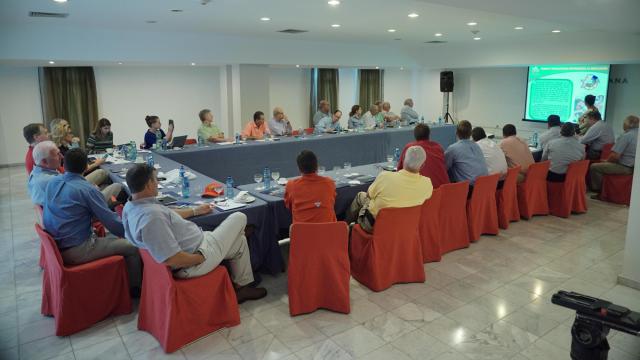 They had meetings all day at the hotel, Melia Habana. They met with an agriculture economist from the University of Havana, a representative of the small farmers association and a representative from the Ministry of Foreign Affairs of Cuba.

They took a lot of notes, and so did I.

I had an aha moment when the representative from the Ministry of Foreign Affairs spoke. He took issue with those who said “normalization of diplomatic relations.”

“I always say that United States and Cuba have never had a normal relationship,” he said.

He had a point. There may have been a time when there less tension, but I’m not sure when the relationship was ever “normal.” It caught my attention and I decided I would refrain from saying that in future reports.

The presentations and questions were interesting, but at the end of the day, what really mattered was the connection made between two people. After each presentation, the president of the North Carolina Farm Bureau presented the speaker with a Durham Bulls baseball and a baseball holder that read, “North Carolina and Cuba, ready to play ball.”

Also after the presentation, a few members of the delegation would shake hands with the presenter, exchange business cards and engage in brief conversations through a translator, in some cases me. This was the part that really mattered. After an hour-long meeting filled with slides and statistics, what really mattered were the two minutes at the end when smiles, gratitude and contact information was exchanged. That was the true opportunity.