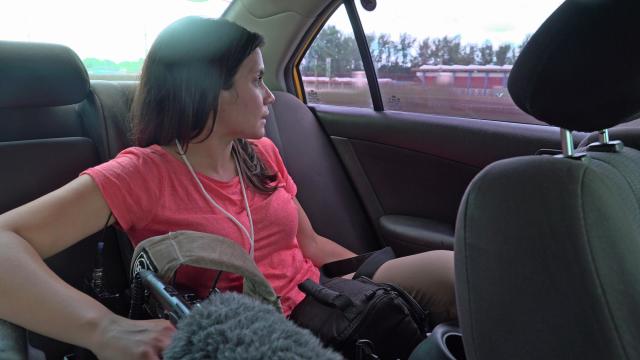 Cuba is only 90 miles away.

It took us less than an hour to fly from Miami to Havana. Yet, many Americans, myself included, think of it as another world because we have had such little access to it.

It didn’t take me long to realize, I wouldn’t experience much culture shock at all.

As soon as the plane landed, Cubans clapped. It’s a tradition that was once quite common in Puerto Rico. I got off the plane and was smacked in the face by the same humidity that greets me every time I visit Puerto Rico.

When we got off the plane, Zac was carrying his 25 pound camera. It caught the attention of two men who immediately approached us to ask questions and request our paperwork. Wearing a polo shirt and jeans, they explained they were Cuban immigration agents. The female border patrol agents in uniform caught my attention. They all wore fishnet stockings.

We had to make a total of four stops into answer the same questions—Who are you? What are you doing? Where are you going?

Picking up our equipment in the baggage claim area was chaotic. It’s a small area for the hundreds of Cubans and tourists attempting to find their luggage. It seemed like there wasn’t an empty spot on the conveyor belt. Many Cubans bring boxes filled with things that are difficult to find on the island for their families. They bring clothes, toiletries, even tires.

Once we counted all five bags, immigration agents approached us again to get a list of our equipment and inspect all of it- paying close to our wireless microphones.

In total, it took us about an hour and a half. As a tourist, this would not have been a big deal. But I’m traveling as a journalist here—which means I’m always on a deadline.

When we were given full clearance, we ran over to the hotel to drop off luggage and got straight to work. We didn’t have much time to relax. It was already 2pm and I had to be live in three hours. We had not tested the Wi-Fi yet or touched base with the operators of our satellite shot to make sure we were set for the 5 o’clock newscast.

If we were going to work on a piece to send back, we had less than an hour to get it done. Andy, our driver, took us to a nearby market, where locals sold crafts. Many were hesitant to talk on camera. One man told me, “I only speak the truth. That’s why I can’t talk to you.”

They assumed we wanted to discuss politics. Once I explained that I just wanted reaction on the pope’s visit, a few agreed. We ran back to the hotel and worked quickly to get the piece written, voiced and edited.

The crew running our live shot was set up at the hotel. It was a gorgeous view. They had a small box for me to stand. (I’m only 4’11) As soon as I put my earpiece in, I could hear our crew back home asking me for a microphone check. It was so comforting to hear them in the craziness of it all. It was hard to believe this was all happening.

I heard the anchors begin to toss to me and I thought, cross your fingers. Here we go.

It was a smooth start. By the end of our segment, I just couldn’t resist tossing back to David saying, “I never thought I’d say this…Live in Cuba, back to you”