DAVID RICE: Record-setting astronaut Koch says women 'can do absolutely anything they want' 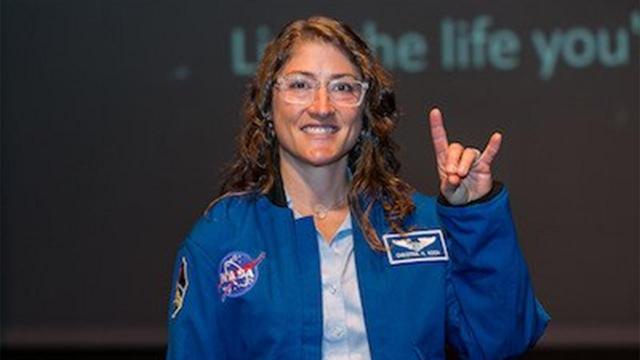 Before she spent 328 days aboard – and sometimes outside – the International Space Station, Christina Koch spent five years at North Carolina State University.

And as she prepared to deliver a commencement address to 9,100 N.C. State graduates in a virtual ceremony Friday evening, Koch (pronounced ‘Cook’) says N.C. State was about much more than the substantial physics and electrical engineering classes she took there.

In a phys-ed class, she also discovered rock climbing. The physical positioning, physics, focus and teamwork involved all helped prepare her to be an astronaut, Koch said.

“We talked more about rock climbing in my astronaut interview than we ever did about engineering,” she said.

Koch grew up in Jacksonville and went to the N.C. School of Science and Mathematics in Durham. At first, she said, she felt intimidated by the experiences of some of her brilliant classmates from larger cities. But for the first time, a math teacher at NCSSM told her she had special skills, and she began to gather confidence.

When she returned to Earth on Feb. 6, Koch had set a record for the longest spaceflight by a woman, 328 days. She and fellow astronaut Jessica Meir also participated in the first all-woman spacewalk.

Asked about her status as a role model for young girls and women in science, she replied, “I really just hope that it’s a model that I can be for them that my role models were for me,” mentioning astronaut Sally Ride and her chemistry teachers among them.

“I’d like them to take away that they can do absolutely anything they want to.”

“It does take a concerted thought that we devote to that,” she said.

“STEM is about teamwork and it's about making the world a better place,” she said. Beyond the lab settings many picture when they think of science, “It’s about working with each other to contribute to the world.”

But then she grew more serious and talked about the perspective developed while looking down on the Earth as she orbited completely around it in an hour-and-a-half.

"It really does give you perspective that we are more alike than we are different, and that we need to take care of the planet we all share,” she said.