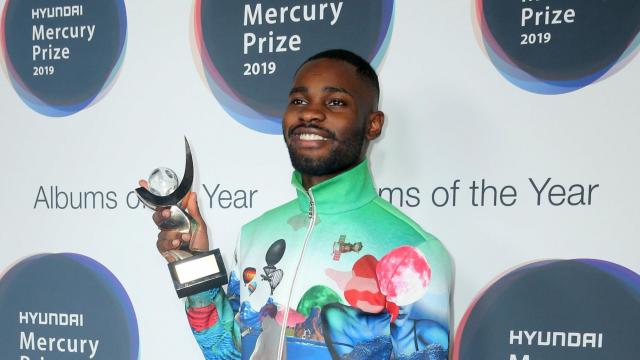 The artist, whose real name is Tyron Frampton, also shouted "F**k Boris, f**k everything" and left the stage to cheers from the audience. The incident was broadcast live on the BBC.

The winner of this year's Mercury Prize was British rapper Dave for his album "Psychodrama," which was released in March.

"'Psychodrama' is the musical equivalent of a literary masterpiece: a conceptual album about Dave's experience of growing up in South London, structured in the form of a therapy session, which takes a deeply personal story and gives it universal relevance," the judging panel said in a statement.

"'Psychodrama' is a moving, musically sophisticated work that tackles complex themes of identity, class, relationships and politics and demands total attention from the listener," the statement continued.

The judges added that it "will have lasting relevance for a generation and underlines the importance of the album as an art form."

In his acceptance speech, Dave paid tribute to the other shortlisted artists, his friends and family. He even invited his mother on stage to join him.

"I'm so grateful. Thank you guys so much," he said.

The prestigious Mercury Prize, first established in 1992 and previously known as the Mercury Music Prize, is awarded annually for the best album released by a British or Irish act.

This year's shortlist of 12 included albums by rock bands Foals and The 1975, and singer-songwriter Nao.

The rapper Stormzy, who was nominated for the 2017 Mercury Prize for his debut album "Gang Signs & Prayer," was one of this year's judges. He was joined on the panel by other leading figures from the UK's music and broadcasting industries.

The judges praised the 2019 shortlist, saying it celebrated "the striking diversity of British and Irish music-makers and their shared purpose in exploring issues of identity and belonging at a time of division and disagreement."

The xx, alt-J, Dizzee Rascal and Wolf Alice are all past recipients of the award.

PJ Harvey, the English singer-songwriter, is the only artist to win it more than once. She received the prize in 2001 and 2011 for her albums "Stories from the City, Stories from the Sea" and "Let England Shake."

The Mercury Prize's most unlucky act is Radiohead. Despite a record five nominations, the band has never gone on to win the award.

The prize is currently sponsored by Hyundai, the South Korean car manufacturer.