Durham, N.C. — The daughter of a woman murdered nearly three decades ago this month spoke for the first time with WRAL News.

Kimberly Rigsbee, 22, from Durham, was taking her trash to a dumpster when she stopped along the side of the road and was shot. Her body was found on Redwood Road near Falls Lake in Durham County, slumped over the steering wheel of her pickup truck, with multiple gunshot wounds to her head, neck and chest.

Around 82% of homicides in North Carolina are solved, many with help from the North Carolina Crime Lab, which analyzes physical evidence. But other murders are solved with tips, and that's what the family of Kimberly Rigsbee hopes will happen.

Brittany Rigsbee, now 29, recalls the story of how her young mother was killed. Even though she was just a baby at the time, she has heard her family tell the story for years.

"I've always wanted to know," Brittany Rigsbee said. "It bothered me for a long time because I looked so much like her."

She said she had trouble looking in the mirror because she saw herself as a reflection of her mother. People would tell her that her eyes and laugh are like her mother's.

Brittany Rigsbee's father, Donnie Rigsbee, had been killed in a motorcycle accident four months before her mother's death. 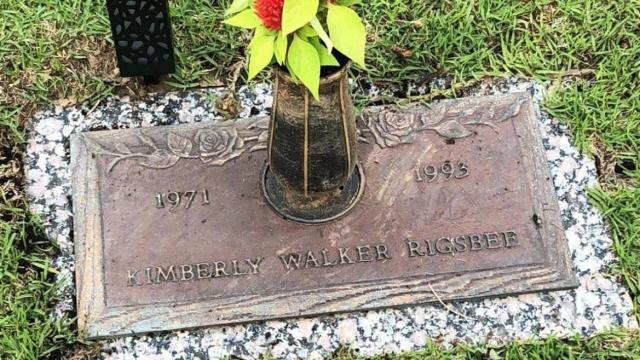 Now, Brittany Rigsbee is expecting her first child. The prospect of being a new mother has pushed her to want to know the truth about hers even more.

"The hardest [part] is now I'm about to have my first child, and she's not here," she said. "My child will never get to know her grandmother."

Investigators believe that the crime was personal, and evidence from the scene shows that Kimberly Rigsbee likely knew her killer.

"I want justice, but I want to know why, [if] they knew her well enough to know that when they took her, it was going to leave me without any parents at all," Brittany Rigsbee told WRAL News.

A retired detective with the Durham County Sheriff's Office, Steve Rigsbee, worked on Kimberly Rigsbee's case at the time. While both murder victim and investigator share the same last name, they are not related.

The detective recalls the random murder of Kimberly Rigsbee was unusual.

"We didn't have many murders at all. It was kind of rare ... and everything made me kind of suspicious," Steve Rigsbee said.

Steve Rigsbee was called to the scene quickly because investigators were concerned he was related to Kimberly. He also has a relative named Kim.

Durham County Sheriff's Investigator Tom Mellown told WRAL News in 2017 that her truck was still running when her body was found.

“It may have been somebody she knew that she flagged down,” Mellown said. “She may have stopped to talk to somebody. That’s unclear. Somebody that was standing at the driver’s side window started firing shots at her.”

Steve Rigsbee said Kimberly Rigsbee made a phone call immediately before her death. She stopped to call a man whom she was seeing at the time to say she believed she was being followed.

"She said the person was blinking their lights," he said. "So apparently she pulled over on the side of the road."

There were never any solid leads in the case, Steve Rigsbee said, and only one witness came forward. The witness said she saw a white male with blonde hair and scruffy beard speed by her after she heard gunfire.

The night before her death, Kimberly Rigsbee had told her brother she believed she was being watched.

Both the retired investigator and Brittany Rigsbee hope that talking to WRAL News will bring forward new leads.

"Somebody is going to have guilt in their heart, or somebody really knows something," he said. "They're going to have to come forward."

The detective believes even after all these years the case can be solved. The Durham County Sheriff’s Office said this case is still open and active, and they would welcome any leads that would help them solve it.

Officials with the sheriff's office said there are more than 20 unsolved homicide cases, dating back to 1968. The most recent was recorded in 2013.

If anyone has information about the crime, officials ask that they reach out to CrimeTip@DurhamSheriff.org or call the confidential hotline at (919) 560-7151.