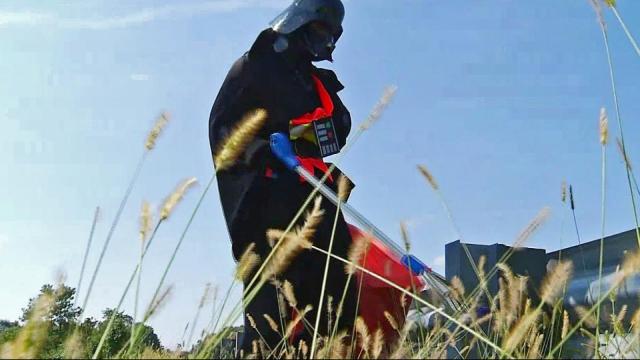 Along the highway in Blacksburg, Va., drivers would be forgiven for thinking they'd gotten lost in a galaxy far, far away. There, alongside the road, is Darth Vader.

Instead of a light saber, this Vader wields a gripper to pick up litter.

Inside the costume is Henry Wakley, who adopted a 1.5 mile stretch of Route 460 through the Adopt-A-Highway program.

Wakley spends most of his time working in New Zealand, but when he is home in Blacksburg, he passes time picking up trash.

"The lack of cleanliness disrupts me," he said.

One driver called police to report that Batman was walking along the highway. Officers quickly learned that it was another dark knight in a long cape.

"I like to get out here and dress up because it makes people smile going by," Wakley said. "We need to end this destructive behavior to restore the galaxy."

Copyright 2016 NBC News. All rights reserved. This material may not be published, broadcast, rewritten or redistributed.