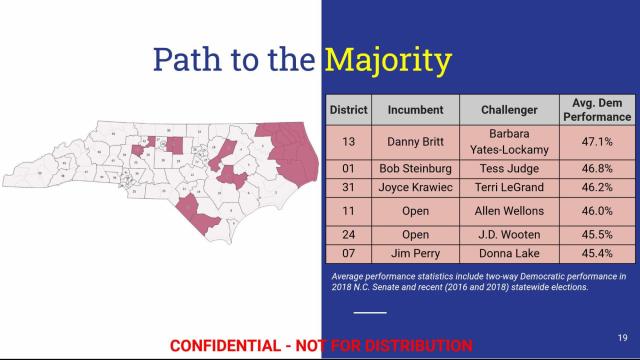 Raleigh, N.C. — A new dark money group started by a former Democratic state senator will target half a dozen Senate races this year in a bid to flip party control in the chamber.

Education Now was incorporated in January by Linda Garrou, who was part of the Senate's Democratic leadership team until Republicans took the majority in 2011. It's one of the 501(c)(4) groups that have become prominent in modern politics, and it's pitching donors on a $1 million to $2 million plan to target six Republican seats.

These nonprofits offer a legal way to take anonymous and unlimited money from donors and use it to pay for thinly veiled political advertisements that focus on "social welfare," to use the jargon from section 501(c)(4) of Internal Revenue Service regulations.

Education Now is far from the only dark money group to key on specific races, but the group's pitch to donors – marked confidential but provided Wednesday to WRAL News – is brazen. It promises anonymity and says its mission is to "promote policies that advance educational and economic opportunities for all North Carolinians."

"To accomplish this mission, Education Now will educate North Carolina voters about the records of targeted state legislators and candidates, with the goal of replacing the N.C. Senate leadership in 2020," the 22-page presentation states.

It goes on to identify six specific seats the group plans to target.

The line between permissible and impermissible spending under IRS rules can be a thin one, and the rules are rarely enforced. But IRS requirements say 501(c)(4)s can engage in political activity only "so long as that is not its primary activity."

Whether Education Now crosses that line depends on what else it does, campaign finance experts said.

Rebecca Kasper, a Democratic fundraiser and the group's executive director, said in a statement that "educating our state’s residents about the failed policies of the current legislative majority and holding candidates accountable for their positions on key issues are important aspects" of the group's mission.

"Let's just say I would give different advice," Hurley said. "I would advise a hypothetical client not to draw in election results."

The group's targeted districts are key priorities for Democrats as they try to take back Senate control:

The group's donor pitch says it "will invest in an unprecedented digital and direct-mail advertising campaign focused primarily on these 6 districts." It lays out budget basics to spend $1 million or $2 million, depending on fundraising.