Dalton stays on attack after debate 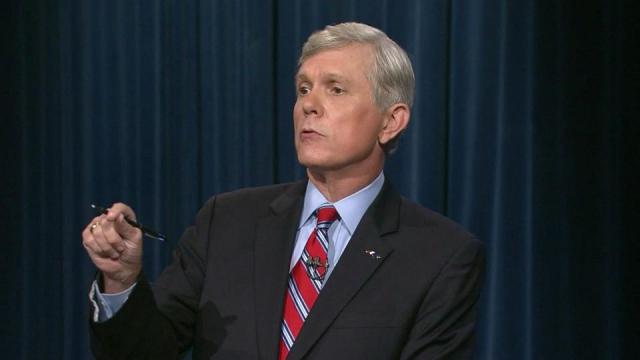 Raleigh, N.C. — Democratic Lt. Gov. Walter Dalton remained in attack mode Thursday as he returned to the campaign trail a day after sparring with Republican Pat McCrory in the first of three scheduled gubernatorial debates.

In an appearance in Raleigh, Dalton said McCrory has raced out to a double-digit lead in polls conducted by WRAL News and other organizations primarily because he unsuccessfully ran for governor in 2008 and has kept his campaign going ever since.

"People know his name, but I don't think they know his policies," Dalton said. "Last night, I was able to, I think, put him on the defensive, and he's having to defend some policies I think are indefensible.

"When (voters) see that agenda, I think they're coming my way," he continued. "Time is a factor, but we've got time on this thing. I'm working it every day, every hour."

Dalton also had appearances in Greensboro and Charlotte on Thursday, while McCrory took the day off from public campaigning.

During the debate, Dalton went after McCrory on issues from taxes – he said the former Charlotte mayor would shift the burden from corporations to middle-class families – to education spending – he said McCrory would continue to cut money in early childhood programs – to natural gas drilling – he called McCrory a shill for energy companies.

The harshest confrontation came in discussion of an ad Dalton's campaign posted online last week. In it, black leaders accused McCrory of being insensitive to them.

McCrory called the ad "inexcusable" and said it was a low point in North Carolina political campaigns, but Dalton defended the ad, saying it was in response to a McCrory campaign ad that used a former Wilson County sheriff known for blaming his own election defeat on race.

"If he finds this offensive, it is because he has offended," Dalton said.

After the debate, McCrory criticized Dalton for the attacks.

"That's what the underdog almost always does. You can't just sit there and take the status quo. This is his attempt to shake things up, shake McCrory up," Greene said.

Many political pundits gave Dalton a slight edge in the first debate. Greene said that matters because most voters don't actually watch the debates – they watch the news coverage.

Still, he said he doesn't think Dalton will make up much ground.

"I cannot imagine that anything that happened last night is going to erase a 12-point difference in the polls," he said. "'Edged' does not get it. 'Wiped the floor with' – that might get you some momentum, but at this point, where the polls seem to be, 'edged' is just not good enough for Walter Dalton."

McCrory and Dalton are scheduled to meet twice more – on Oct. 16 and Oct. 24 – but Greene said those debates might not matter much either.

"There's just not a lot of evidence that (debates) have a big impact on elections. From that perspective, we do pay too much attention to them," he said.