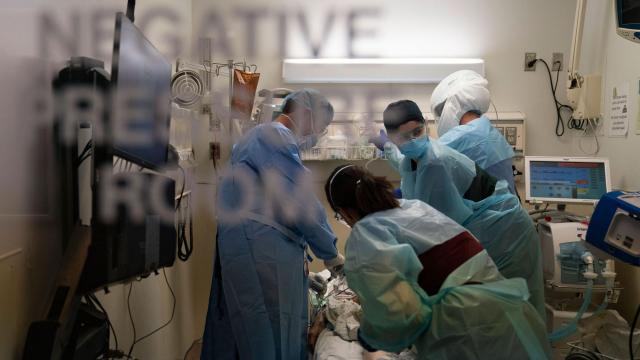 CNN — The total number of coronavirus deaths reported in a day set a new record Wednesday and hospitalizations also reached an all-time high, and doctors and nurses across the US are trying to find creative ways to handle the surging number of patients.

The numbers are grim. More than 100,200 patients were in US hospitals Wednesday, according to the COVID Tracking Project.

There were more than 2,670 deaths reported Wednesday, according to Johns Hopkins University.

Those totals have never been higher. The stress on frontline health care workers has never been greater.

One county official in Wisconsin told CNN, "Our hospital ICUs and emergency rooms remain stretched beyond any reasonable limit and our healthcare workers as well as our patients need our help."

And the head of the Centers for Disease Control and Prevention said Wednesday that these next three months will be "the most difficult time in the public health history of this nation."

After they are authorized by the federal government, coronavirus vaccines should help blunt the pandemic, but experts think it won't be until spring before a lot of Americans can get them.

Right now, the situation in places like Dane County, Wisconsin, are dire. Dane County Executive Joe Parisi, who told CNN resources are alarmingly stretched thin, said medical facilities are nearing capacity and this was the worst of the pandemic.

Dr. David Andes, who is a professor and chief of the Division of Infectious Disease within the Department of Medicine at the University of Wisconsin, said their hospitals are about 98% full.

"Our numbers are pretty out of control right now," he said.

Andes said hospitals are trying to work through the crisis by finding new places to care for Covid-19 patients. Some are being treated in a children's hospital. Some patients are being seen by doctors who are working outside their specialties. Many health care workers are signing up for extra shifts.

Other hospitals are facing similar demands. And while those facilities have been stretching capacity -- by opening up new areas, creating more double occupancy rooms and bringing in staff from outside its own system -- "we are out of levers to pull," Dr. Jason Mitchell, chief medical officer of Presbyterian Healthcare Services in New Mexico, told CNN.

"When you run out of resources -- whether that's doctors or nurses or beds or ventilators -- you cannot give (the best) care. ... We are not there yet (but) we are very close as a state."

The number of Covid-19 patients in US hospitals will stay high for months, the CDC's top official said Wednesday.

"The reality is, December and January and February are going to be rough times. I actually believe they're going to be the most difficult time in the public health history of this nation, largely because of the stress that's going to be put on our health care system," said Dr. Robert Redfield.

Daily coronavirus cases and deaths also have been soaring.

The US has averaged 161,448 new cases daily over the last week -- nearly 2.5 times the summertime peak in July.

But as coronavirus hospitalizations rise, the number of daily deaths is predicted to get worse, with various experts recently warning that it could regularly surpass 2,000 and 3,000, and perhaps approach 4,000.

Health experts say they expect cases and hospitalizations to swell further in the coming weeks, when infections from Thanksgiving gatherings start to manifest.

And the CDC, like it did for Thanksgiving, is recommending that people postpone travel over the upcoming winter holidays, CDC Covid-19 incident manager Dr. Henry Walke said Wednesday.

The world appears to be moving closer to available Covid-19 vaccines: The United Kingdom on Wednesday became the first Western nation to approve one, and the first doses are expected to be rolled out across that country starting next week.

And two companies are preparing to ship out vaccines in the United States, anticipating the US Food and Drug Administration will give them emergency approval this month.

Initial supplies in both countries will be limited, and the wider population won't have access to them until months into 2021. A CDC panel recommended Tuesday that heath care and long-term care workers get inoculated first.

Vaccine candidates from Pfizer and Moderna are awaiting emergency use authorizations in the US, with an FDA panel expected to meet about whether to authorize them on December 10 and December 17, respectively.

Assuming the vaccines are authorized, the vaccines' first shipments could happen December 15 and 22, respectively, according to a document from the federal government's Operation Warp Speed.

"All the investments we have made in scaling up and starting to stockpile manufacturing of the vaccines allow us to stay confident that we will be able to distribute 20 million vaccines, enough to vaccinate 20 million people in the US in December," Slaoui told a news briefing.

The United States has said if both Pfizer and Moderna win FDA emergency use authorization in December, they could distribute 40 million doses of vaccine by the end of the month. Each vaccine requires two doses, so that's enough to fully vaccinate 20 million people.

Slaoui said he expected 60 million more vaccines by the end of January.

New guidance from the CDC says quarantine periods can be shorter than 14 days for some people exposed to Covid-19.

CDC continues to recommend quarantining for 14 days as the best way to reduce the risk of spreading Covid-19, said Walke, the CDC Covid-19 incident manager.

"I want to stress that we are sharing these options with public health agencies across the country, so that they can determine how long quarantine period should last in their jurisdictions based on local conditions and needs," Walke said. "Everyone should follow this specific guidance from their local public health authorities about how long they should quarantine."

Reducing the length may make it easier for people to quarantine, Walke said, and lessen stress on the public health system as new infections are rising quickly.

States push back against climbing records

Tuesday was a record-breaking day for coronavirus devastation in many states, and local leaders are pushing back with new measures to combat the virus.

Mississippi since late October has had a mask mandate in certain counties where the spread of the virus was worst. The governor added 13 counties to that list -- meaning the mandate is now in 65% of the state's counties.

"This is a time when the virus is extremely present," Gov. Tate Reeves told reporters. "The risk is higher of catching it because of the number of cases that we're reporting, there is more virus in the communities."

Kentucky Gov. Andy Beshear called Tuesday the state's "worst day ever" for the coronavirus by "virtually every measure."

"It is the deadliest day that we have had," Beshear said. "If we don't all do our part, if we try to be the exception, then slowing down this thing won't work, and we will lose a lot more Kentuckians we love and care about."

California's Los Angeles County also had its "worst day" yet when it came to cases and hospitalizations, according to county Health Director Dr. Barbara Ferrer.

"However, it will likely not remain the worst day of the pandemic in Los Angeles County. That will be tomorrow, and the next day and the next as cases, hospitalizations and deaths increase," she said.

A modified stay-at-home order went into effect in the county Monday, prohibiting outdoor dining and gathering with people outside a single household.