Durham, N.C. — Some teachers and parents in Durham now have a set of homemade cartoons to help celebrate Black History Month.

"PAAC" or "Parents of African-American Children" at Parkwood Elementary School knew this year would present more of a challenge.

PAAC chair and kindergarten parent Shanna Weaver said, "It was going to be hard to switch from in-person to virtual (classes), and how do we make it have an impact during Black History Month?" 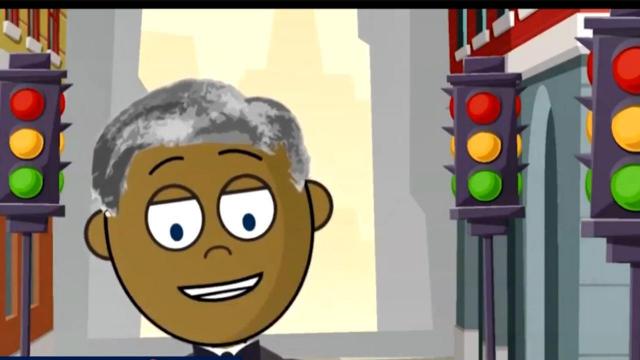 Their first plan was to simply create a fact sheet to distribute to school staff and families at Parkwood. Then Weaver heard an offer from PAAC member Mary Williams. She said, "My husband could create a cartoon."

"We had no idea that he was as talented as he is," Weaver said.

Williams remembers, "They gave us a fact sheet with some important moments in Black history and then John kind of took it from there." John Gilliam is creative services director at WRAL-TV and had access to animation software.

Gilliam explained, "We use the Adobe Creative Studio and character animator which is really cool because when the kids talk, the mouths on the character will move."

He also decided to tap into the talents of his own two children -- Mia, a kindergartner at Parkwood, and her younger brother, Enzo.

Mia became the voices of a variety of notable figures in Black history, including Alexander Miles, the inventor of elevators with automatic doors.

While Mia spoke the parts of accomplished inventors and successful business and political figures, Enzo offered comic relief as the voice of Spiderman or the sound of a squawking parrot landing in the cockpit of a plane flown by Bessie Coleman, the first African-American pilot.

Joy Spencer is the parent of a toddler who also works for EPIC or "Empower Partners in Community," the "mother board" over the non-profit PAAC groups. She said, "Our other schools are sharing this around. Families are doing it. I’ve shared it with my kids’ daycare, so it’s just really spreading like wildfire."

Weaver said, "They (younger children) will always remember the cartoon more than just spit out some facts to you."

Other notable Black history figures featured in the videos now available on YouTube include the contributions of Gladys West, a mathematician whose work helped lead to GPS, or global positioning satellites.

Future notables in Black history may possibly include the first African-American pre-schooler and kindergartner to star in Black History Month cartoons.

Williams says the experience has already paid off for her children. "Because they were making and creating it themselves, they were more involved in the learning," said Williams.