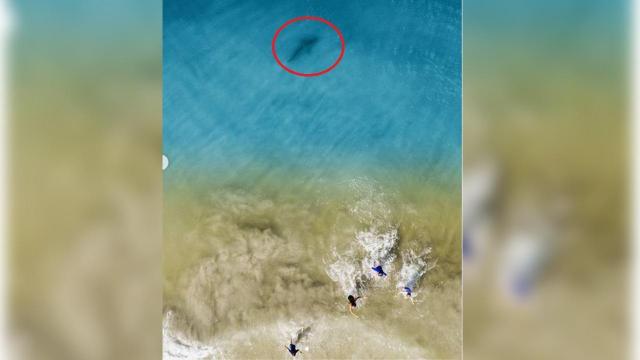 New Smyrna Beach, Florida — An Instagram post from a man claiming his drone helped him spot a shark swimming around his children is going viral.

"See that dark shadow making its way straight for the shore and those people? That was my view this weekend while flying my Mavic 2 Pro," posted Dan Watson.

According to the June 24 post, Watson was flying his drone at New Smyrna Beach in Florida when he spotted a shadow near his kids, who were playing in the ocean.

Watson wrote that he immediately asked his kids to get out of the water.

"Definitely too close of an encounter for my liking," he posted. "My drone is now coming with me to every beach day."

Watson's post elicited a similar response to one Ginger Gilmer posted earlier in June. Gilmer was in her hotel room when she took a picture of sharks moving several feet away from swimmers at Myrtle Beach.

The post was shared 32,000 times in six days, and many took to social media to argue that the ocean is a shark's home -- and humans are the visitors. Others said her post hurt tourism for the beach communities and beach towns.

Gilmer responded, saying she respects the ocean and knows it’s where sharks live. She said her goal was to show how close the sharks were to the people.