Fuquay-Varina, N.C. — A Triangle area father is accusing a daycare of physically abusing his 4-year-old son after he says employees went too far when they were cleaning the boy’s face.

Agustin Luna, a single father of two, has filed a police report and is demanding an investigation after he found his son, Agustin’s, face red, scabbed and bruised after picking him up from a Fuquay-Varina daycare center on May 13.

“Seeing my son like that, that was terrible,” Luna said.

Luna said his two boys were playing with markers and had written all over each other and he couldn’t get the markings off by the time he dropped them off at Little Angles Preparatory school the next morning. Luna said he told daycare employees not to worry about the markings, because he would take care of it when the boys got home, but around mid-day, he said he got a call from the daycare center.

“She says she washed Agustin’s face. She says it’s going to be a little bit red, I put medicine on it, I put Neosporin,” Luna said of his conversation with the teacher.

Luna said he was angry when he saw what the teacher described as “a little bit red” and he asked his son what happened. 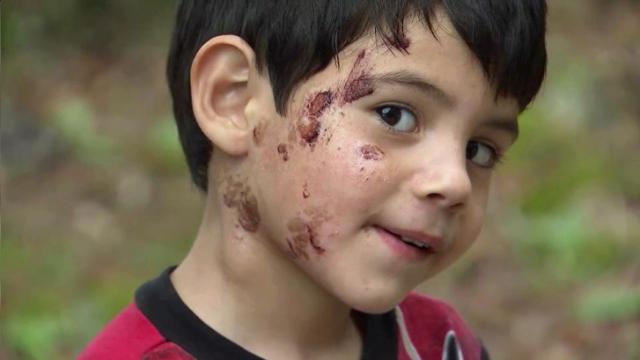 “He was telling me the teacher scrubbed it with a brush, wiping, and then a paper towel,” Luna said.

Luna took his son to the hospital and then started documenting the worsening condition of his son’s face.

A worker at Little Angels Preparatory would only say the teacher was trying to help and that Luna was blowing the situation out of proportion.

Luna said he wants the daycare to be accountable for what happened to his son.

“No kid four-years-old deserves to be hurt like that,” he said.

Luna said Fuquay-Varina police told him a detective will be in touch with him in the next few days.

He said he found a new daycare center for his sons and plans to take Agustin back to his pediatrician Thursday for a follow-up visit.

No charges had been filed Wednesday night.