Cynthia Nixon Says She Can Win. But Who Are Her Voters? 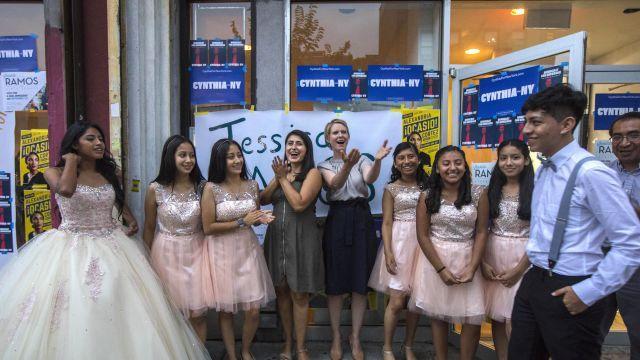 NEW YORK — Bonsu Thompson was, by his own admission, an unlikely host for a fundraiser for Cynthia Nixon’s campaign.

Thompson, a writer and producer, had never organized an event for a candidate before. Usually, he found politics distasteful. “Folks who know me know that I’m not exactly a political person,” Thompson told the crowd of roughly 150 people gathered on the Bowery Hotel’s rooftop for the event.

But if Nixon is to have any chance of defeating Gov. Andrew Cuomo in the Democratic primary on Sept. 13 — as her campaign insists she does, despite poll after poll in which she trails him by gaping margins — it will be because voters like Thompson became political people.

“Polls are not capturing who the new electorate is,” Nixon said. “We have a younger, more progressive, more diverse electorate. Those are the people that are going to turn out for me.”

To reach that electorate, Nixon has spoken at places like the Bowery Hotel fundraiser, which the campaign billed as an event for “young creatives.” She courted support at a South Asian street fair in Jackson Heights, Queens, even though Asians rank near the bottom of ethnic groups in terms of voter turnout. She joined a round-table discussion with the Muslim Democratic Club of New York City, which accused Cuomo of never visiting a mosque as governor. She met with disability rights advocates, one of whom, Colleen Flanagan, the director of Disability Action for America, said their community had typically seen “zero inclusion, and actually exclusion from political campaigns.”

L. Joy Williams, a senior adviser to the campaign, described the approach as seeking out the voters that most campaigns left “on the table.”

“We’ve gotten people who say, ‘No one has ever knocked on my door for a campaign,'” Williams said. “It’s really engaging those pockets all across the state that exist, engaging them because no one has ever engaged them in a real discussion.”

Dismissing the polls in favor of anecdotes about “energy” and “excitement” may seem like at best an excuse and at worst a delusion for a candidate who is 30 points behind. Nixon herself has acknowledged her path to victory is narrow. But there are reasons to not completely discount her approach.

Much of the campaign’s attempts to woo disengaged voters has unfolded digitally. The campaign has blasted registered Democrats with text messages and recruited longtime Instagram followers for canvassing shifts.

Nixon’s campaign page has run more than twice as many Facebook advertisements as Cuomo’s has since May, according to the social media site’s political advertisements archive, although the governor’s team said those numbers did not account for how many people actually saw each post. Cuomo, meanwhile, has lavished $5 million on television advertisements in the last month alone — more than twice the total amount of money Nixon has raised overall.

“You don’t approach them by putting up TV ads on ‘Jeopardy,'” Christine Marinoni, Nixon’s wife, said of the Nixon campaign’s target voters. Marinoni, a former education organizer, has played a key role in shaping the campaign’s outreach efforts. “They’re online 24-7, and they’re on in a very specific way, and you have to be smart about how to find them.”

At the Bowery Hotel event, when Jumaane D. Williams, Nixon’s chosen candidate for lieutenant governor, asked the crowd — mostly millennials, many nonwhite — if any had received a call from Siena, the college that conducted several of the recent polls, no one raised a hand. Few seemed to understand what or who Siena was.

But there is also reason to be skeptical of the campaign’s optimism. While Nixon’s campaign, with its potent blend of celebrity and “blue wave” rhetoric, has attracted an unusual amount of attention for a rookie candidacy, much of that attention may not translate into ballots.

Nixon’s campaign has boasted of a record number of individual contributions, but nearly half of her donors do not live in New York state, according to campaign finance filings. One attendee at the Bowery Hotel said Nixon had helped inspire her to pay more attention to politics, but noted that she was a Canadian citizen. One of the event’s hosts, Shariffa Ali, said she had just received her artist’s visa as an immigrant from Kenya.

Other candidates around the country have cited Ocasio-Cortez’s win as a blueprint for their own campaigns, but few have matched her success, despite also promising to engage new voters.

And the progressive blocs that Nixon’s campaign has declared will drive her to victory are not united in their support. After the national progressive group Indivisible endorsed Nixon, several local branches issued an open letter of dissent: In their Facebook groups, members worried about Nixon’s lack of governing experience. Prominent women’s and gay rights groups have backed Cuomo. The New York City chapter of the Democratic Socialists of America endorsed Nixon, but not before dozens of members signed onto a blog post urging against the decision, raising concerns about her socialist bona fides. The group’s Albany chapter chose not to issue an endorsement, in part because members thought Nixon had not spoken enough about upstate.

“You’ve got to fish where the fish are,” said Peter Warren, acting chairman of the Albany chapter, of Nixon’s perceived focus on voter-dense New York City. But as a result, he said, “the interest was not red-hot” in issuing an endorsement.

The criticism that Nixon has focused too much on city dwellers is a common one, albeit one her team dismissed, citing visits to Syracuse to discuss immigration policy and to Hoosick Falls on environmental issues.

Nixon may actually find an unexpectedly warm reception upstate. In the 2014 Democratic primary for governor, Zephyr Teachout, who also ran to the left of Cuomo, won many upstate counties; in the 2016 Democratic presidential primary, Bernie Sanders beat Hillary Clinton in almost every county outside of New York City.

Nixon may benefit from voters who are not so much pro-Nixon as anti-Cuomo, as the governor’s gun control policies have made him deeply unpopular in rural areas, including among Democrats. Although Nixon largely shares Cuomo’s views on gun control and has called for further restrictions, the Siena polls have consistently shown her with more support upstate than downstate.

That diverse amalgam of New Yorkers — those tired of Cuomo, those who have never heard from Cuomo, those thrilled about Nixon — is who Nixon’s campaign is relying on next month. “To a certain extent, the larger conversation on who the typical voter is for the campaign, is sort of an outdated model,” Williams said.

But no matter the mold of voter, first they will have to turn out. Ali, one of the hosts of the Bowery hotel fundraiser, acknowledged that one event might not be enough to drive her friends to the polls.

“I think there were some people who were there that night who were like, ‘Hm, OK, I’m here for Shariffa. I’m here to support my friend. And it also happens to be a Cynthia Nixon event,'” she said.

But even if they did not end up voting for Nixon — as Ali, here on an artist’s visa, would not be able to do — she was excited about the potential to start a political conversation.

“Like many of my peers, I’d been sort of apathetic in the sense that I actually have no sway,” Ali said. “Now that I know this is possible, and I do have some kind of influence, I would like to try and see how many more young people I can encourage to get involved.”