CVS manager who foiled robbery: I was just defending myself

Cary, N.C. — The assistant manager of a CVS who stopped an armed robbery last week said Thursday that he's no hero. He said he was simply trying to save the lives of everyone in the store, including his own.

An armed man in a mask walked into the CVS at 10170 Green Level Church Road in Cary last Friday night shortly before closing time.

"I just turned my back and said, 'God, please let this be a joke,' and he took the gun out and said, 'Nope, you know what time it is,'" the manager said Thursday.

He spoke with WRAL News but wanted to keep his identity confidential, saying he is afraid of retaliation.

The manager tried to keep everyone calm, including the cashier, but the register locked up.

He then asked the robber to let the cashier and a customer leave.

"I'll give you what you need, but you have to let my customer and my employee out the door safe. Once they're safe, you can have whatever you need," he said he told the robber.

The robber agreed, but once he was alone with the manager, he put his gun to the manager's head.

"He cocked it back, and he put it to my head. We were both fussing," the manager said. "I chased after him, and I kicked him. I didn't tackle him. I actually kicked him in the middle of his back through the doors, and it broke the door on the store."

The robber fell to the ground, and the manager grabbed his gun just as police arrived. Two suspects were arrested nearby a short time later.

"It was all an act of me defending myself at that point because I was scared," the manager said. "I won't lie to you. I was scared for my life." 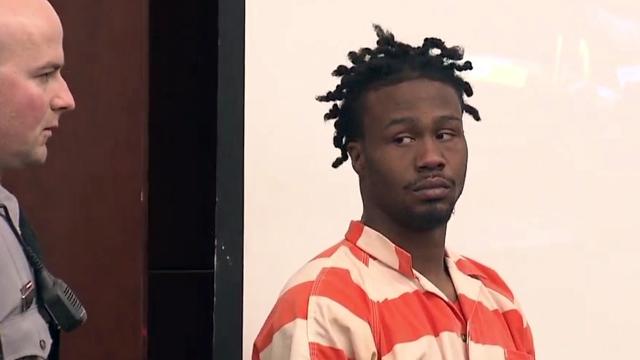 Christopher Terrel Purnell, 24, of 10 Autumn Leaf Lane in Durham, and Anthony Denzel Burton, 25, of 621 Chandler Road in Durham, were charged in the case.

The manager said he worries about the possibility of losing his job for violating CVS policies, but the community has rallied around him, writing to corporate headquarters to let executives know they believe he is a hero. Some people posted on Nextdoor Thursday that CVS management has said he will keep his job.

Despite the fear and the worry, he said he would do the same thing again.

"Everyone asks, do I regret it. I have to tell you I don't because I'm alive, first of all. They're still alive," he said.