Cutting Into Afghan Patronage: A Struggle to Make Government Younger 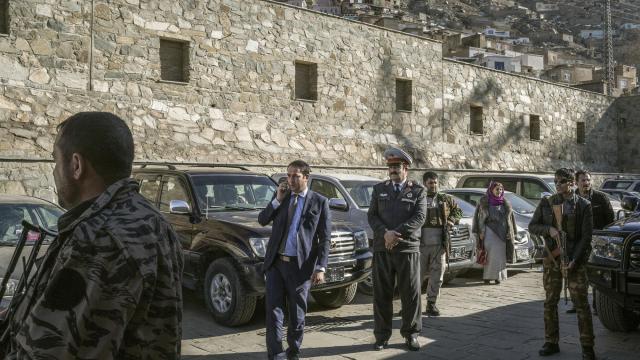 KABUL, Afghanistan — When Ashraf Ghani, a former academic and World Bank technocrat, took office as the president of Afghanistan in 2014, he promised to change the way the country was governed by putting a new generation of Afghans into leadership positions.

The long war with the Taliban was still raging. A disputed election had almost fractured the country. The treasury was drained. The state operated more as a patronage network for the elite than a government delivering to its people.

But Ghani still saw an opportunity. He wanted to take a country stuck in a hostile geopolitical vise and held together by fragile compromises and transform it into a regional hub for trade and transportation between Central Asia and South Asia.

To carry out this transformation, he would rely on a class of relatively young Afghans who since 2001 had gained better access to quality education, embraced new ideas from beyond their borders and appeared ready to buy into Ghani’s vision. He promised to increase the number of government positions for women, who had struggled to find leadership jobs beyond the token ones.

Three years later, Ghani’s coalition, including his partner in government Abdullah Abdullah, has largely kept with that promise, injecting educated young people into senior positions across the government.

But many of the young technocrats have found themselves in a daily struggle against long-entrenched patronage systems. And they have proved vulnerable in part because Ghani has been unable to manage the country’s elite power brokers, who have a deep interest in keeping the patronage status quo, and has failed to create a political consensus for the reforms he wants.

Some of the advisers whom the president’s orders are filtering through are coming from the West, lacking fluency in the nuances of the country’s politics and unable to help the younger officials maneuver within it. Others are reluctant to change the workings of the old patronage system because they also profit from it. Some of Ghani’s own moves — such as appointing his uncle, who is well into his 70s, as ambassador to Moscow — has also muddied his message.

Although Ghani has tried to bring about a generational shift at the top by making an opening for the young and well educated, nepotism still trumps merit for much of the rest of country’s civilian workforce.

Afghanistan produces 50,000 to 90,000 university graduates each year, but the government generally recruits applicants for only about 15,000 positions each year. Such is the competition that in recent months more than 280,000 people applied for 18,000 entry-level government positions. Entrenched patronage networks have long favored those with connections. The challenge for educated young men and women who lack connections to break into the bureaucracy can be seen from a visit to the Civil Service Commission, which regulates the recruitment of a civilian workforce of 400,000 people.

Once a week, the commission’s new leaders — ranging in age from 26 to 42, and mostly government outsiders — open their doors to the public to hear tales of frustration and disillusionment with corruption from visitors who are mostly young, educated and heartbroken.

One young man with a master’s degree had been shortlisted for dozens of government positions over two years, but never got a final call. He said he was considering emigration. Another, who has a law degree from Egypt, was denied a position at Afghanistan’s election commission despite having completed a rigorous recruitment process.

“What happened to all the calls for youth to come work for the government?” the young man said.

Nader Nadery, the chairman of the Civil Service commission, said his team had two urgent missions. One is to revamp the government’s recruitment process, replacing patronage and favors with transparency and technology to ensure merit.

The other mission is trying to change, one conversation at a time, a deeply rooted culture in which an Afghan visiting a government office can often expect humiliating treatment.

They begin with consoling disappointed applicants.

“I am sorry for what you have been through,” Nadery said to the young man turned down for a job. “Your case, unfortunately, is not an exception — often the reality is that hiring happens based on biases. But we need your patience. Until a new system takes the place of connections and meddling, it will take a little time.”

Those who work closely with Ghani, 68, say he has an almost blind faith in young people with technical expertise, partly because he struggles to connect with the politics of his own generation. He has entrusted some of his government’s most difficult tasks to some of the youngest officials, many of them political novices.

After earning a master’s degree in the United States, Abdullah Habibzai, 33, a university lecturer in engineering, began writing about the urban chaos of Kabul, the capital. The city was designed for 1 million people but now houses as many as 5 million. Seventy percent of its growth is unplanned.

Ghani read some of the writings and, in the spring of 2016, asked Habibzai to meet with him. After a brief conversation, the president appointed him to be Kabul’s deputy mayor, and within a month Habibzai was promoted to acting mayor.

With Ghani’s blessing, Habibzai started revamping the mayor’s office, which employs about 8,000 people and tens of thousands of contractors. He replaced 80 percent of the top officials with Western-educated Afghans 25 to 35 years old who, in one of the country’s oldest and most corrupt institutions, operate the city government like a startup enterprise. “Being Kabul mayor is not an easy task — this city has problems that no other capital has,” said Sayed Makhdoom Raheen, a former minister of culture. “The people expect overnight change, and they have the right to. They have been pained and slapped by misfortunes. But I see the future of this city as bright with a young mayor who understands the challenges.”

But Habibzai said that he underestimated the political resistance he would face, and has found himself pleading with the president and Kabul’s residents for more time to carry out his promised changes.

At city meetings Habibzai clicks through PowerPoint presentations, his soft voice barely audible above the screeching of chairs. He explains how he has increased the city’s revenue by about $14 million, designed new roads and a bus system to ease congestion, and developed plans to transform the traffic police, now equipped with only whistles and paddles, into a force with body cameras and tablet computers.

The struggles faced by young women in the government have been even more formidable.

Last year, Ghani asked Nargis Nehan, 37, to run, and clean up, the Ministry of Mines and Petroleum, a crucial institution if Afghanistan is to ever tap into its natural resources. Years earlier, when Ghani served as finance minister, he appointed Nehan as the director of revenue collection when she was only 23. He trusted her incorruptibility in the face of pressures from criminal networks.

For several months after her appointment early last year as she waited for parliamentary approval, Nehan worked to gain the trust of the ministry’s staff. But when Parliament later voted to confirm a list of ministerial appointments, she was the only nominee among 12 who was rejected.

“It was heartbreaking,” said Adela Raz, a deputy foreign minister. “She is a strong woman, she is capable and she knows what she is doing.” But, she added, “The majority of the men could not process the fact that this woman should be a minister.”

Raz was appointed to her post in 2016 when she was 30, and she looks after a portfolio that is central to Ghani’s vision: regional economic and political cooperation. She said that young women in the government were struggling against a culture in which men were not used to the idea of women in positions of power.

“They get confused, totally confused,” Raz said. “They try to fit this individual into the image they have in their head, and it doesn’t fit.”

The work is draining, Raz said, with daily indignities against women, from the bias shown in seating arrangements at high-level meetings to the disrespectful behavior of guards at the entrances of government buildings. But she said that she still believed that if members of her generation, having found a champion in Ghani, could tough it out they could change the culture of Afghanistan’s government.

“There were days I literally thought, ‘This is my last day,'” Raz said. “I felt I would just go upstairs, pick up my purse, and go.”

“We are going to be crushed, we will be disappointed, we will be hurt,” she added. “I have been, a lot of times. But I pulled myself back, and we will have to continue to do so until we become the majority within the system. It is absolutely possible.”