Cuomo vs. Nixon? He’d Rather Campaign Against Trump. 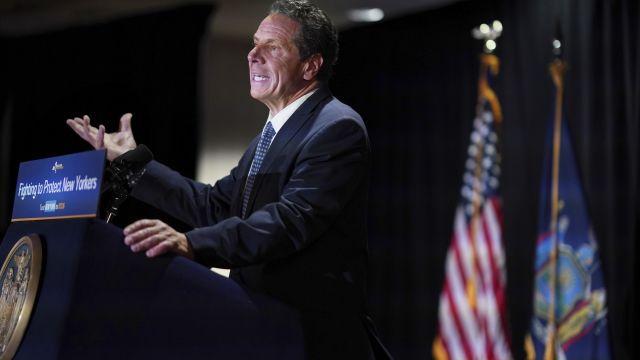 There was a time when Gov. Andrew M. Cuomo used to shy away from criticizing President Donald Trump. No more.

Now, as the governor seeks a third term, he rarely goes even a day without slinging a one-liner at Trump or threatening to sue him.

He has said Trump should be “ashamed” of the impact of separating families at the border, called on him to apologize to Puerto Rico (“They deserve more from you than paper towels”) and said his joint appearance with Russian President Vladimir Putin would have had the Founding Fathers rolling over “in their graves.”

It represents a sharp change in tactics for Cuomo, who as recently as mid-2017 said he found “nasty ad hominem attacks” on Trump unhelpful.

His rhetorical shift has far more to do with putting down an aggressive primary challenge from activist and actress Cynthia Nixon in 2018 than any rumored presidential ambitions in 2020; one of Cuomo’s most recent television ads begins with the line, “He’s taking on Trump’s agenda.”

But taking on Trump also thrusts Cuomo, whose extemporaneous speaking style can lead to verbal misfires, into the national spotlight, for better or worse.

The remark drew furious reaction from the right — it was bannered on the Drudge Report and the talk of Fox News — further cementing Cuomo’s status as a left-wing villain from New York, as his staff sought to backtrack and push back simultaneously.

“We will not go back to discrimination, segregation, sexism, isolationism, racism or the KKK,” Cuomo replied.

For a governor known for his fixation with polls (he has spent nearly $300,000 on them since the start of 2017), the anti-Trump strategy is born of months of focus groups and survey research, according to people involved with the campaign. Cuomo has rotated the issues he has challenged Trump on — immigration, abortion and guns most loudly of late — but the broader frame of him leading the charge against the White House has been the same.

“Thank God for New Yorkers that we have his tenacity, his toughness, his competence and his experience because he knows how to push back,” said Maggie Moran, Cuomo’s campaign manager.

Nixon and other progressive activists argue that the notion of Cuomo as an anti-Trump standard-bearer is risible. She pointed out this week that the day after the 2016 election, Cuomo had said the fact that Trump hailed from New York was a potential “bonus.” And she noted that Trump, formerly a Democrat, was once a donor to Cuomo, calling on the governor to return his money. (Cuomo has declined.)

“The reality is that Cuomo is desperately trying to run against Donald Trump because he doesn’t have the progressive credentials to run against me,” she said Thursday.

When Nixon emerged on the scene in March, Cuomo had found himself seemingly responding to her every move. Her campaign gleefully branded it #TheCynthiaEffect, as he moved toward legalizing marijuana, for example, or presided over Democrats reuniting in Albany after years of division that had helped empower Republicans.

But the governor has mostly ignored her in recent months, doing so at the urging of numerous advisers who intervened in late spring to say his aggression was damaging his own standing while elevating hers. He recently agreed to one televised debate.

While Cuomo had begun to speak out directly against Trump months before Nixon entered the governor’s race — especially about the tax cut legislation that targeted high-tax states like New York and the slow response to Hurricane Maria in Puerto Rico — he has clearly turbocharged his rhetoric and focus in recent months.

By early May, Cuomo was incorporating the line that “New York is the alternative state to Trump’s America” not just into his stump speech but his administration’s daily posture. There have been cable news hits, news conferences and, in a particular Cuomo favorite, sternly worded open letters (eight since the start of July) to Trump and his administration.

His tactical shift was particularly evident at an event at a Manhattan hospital last month, when he railed against “Trump and his cronies” for undermining the health care system. A year earlier, the governor appeared on the very same stage, with the same banner — “Fighting for N.Y.'s Healthcare” — that was used last month. Then, Cuomo had conspicuously avoided saying Trump’s name.

The new anti-Trump message is also being amplified by millions of dollars in television ads, with Cuomo’s campaign spending more than $5 million in the past month, according to his campaign filings.

As Trump arrived in upstate New York on Monday for his first visit as president, Cuomo sniped, “You have clearly forgotten what made this country great in the first place.” Cuomo has mocked the president’s “Make America Great Again” slogan before, but he has been more careful in his phrasing than his assertion Wednesday that America “was never that great.”

It was another example of the governor, who often does not read from prepared remarks, wading into uncomfortable territory. (His office’s clarification that he did indeed see America as great, but that the nation had yet to achieve “maximum greatness,” did not stem the outrage.)

In December, Cuomo condescended to a veteran female reporter who had asked about the state’s sexual harassment policies by saying her question was “a disservice to women.” In April, his joke that he persuaded Joseph J. Lhota to lead the Metropolitan Transportation Authority by tugging on “other parts of his anatomy” fell flat.

Of the governor’s recent remarks about America, Nixon said, “I think this is just another example of Andrew Cuomo trying to figure out what a progressive sounds like and missing by a mile.”

For her part, Nixon has tried to outdo Cuomo on opposing Trump, calling to abolish the Immigration and Customs Enforcement agency and promising driver’s licenses for people living in the country illegally.

And yet, Cuomo’s pitch that he is the man to take on the president has a side benefit: It casts the tough-guy tactics that Nixon has hammered him for — she calls him “Andrew the Bully” — in a positive light benefiting New York.

“There is a real fear amongst Democratic voters that Trump’s America is not their America and that they want somebody to fight back and fight back hard, and in that regard there is nobody better than Andrew Cuomo to do just that,” said Moran, the governor’s campaign manager. “You know he’s fearless. He doesn’t cower. He’ll look a bully in the eye.”

Cuomo has aggressively leveraged his incumbency to make the contrast, ordering state agencies to reject health insurance price hikes because of the president’s partial repeal of Obamacare, suing over the federal limit on deducting state and local taxes, and leaking word through senior administration officials that his tax department is investigating the Donald J. Trump Foundation (no matter that New York’s attorney general had separately filed a lawsuit accusing the foundation of violating campaign finance laws and self-dealing.) So eager has Cuomo been to burnish his anti-Trump credentials that he broke the news on CNN of a multistate lawsuit against the Trump administration’s child-separation policy in late June before an agreed-upon embargo by the state attorneys general who were filing the suit, according to two people with direct knowledge of the episode.

“When we file, how we announce — that matters a lot to us,” said one state attorney general, not from New York, who was involved in the case and spoke on the condition of anonymity to describe a sensitive legal and political matter, adding that Cuomo unnecessarily gave the Trump administration advance notice, even if by an hour.

Mostly, it was viewed as Cuomo trying to take credit for a broader legal action against the Trump administration. “Amongst AGs, it’s a collective eye-roll,” the attorney general said.