Raleigh, N.C. — A Cumberland County Schools student is petitioning her school to change its dress code for graduation, saying the clothing requirements are "sexist," "biased and outdated."

Lacey Henry, a senior at Cumberland Polytechnic High School, collected nearly 600 signatures on a Change.org petition as of Thursday. She's hoping to get 1,000 signatures.

A screenshot included with her petition shows the school requires girls to wear a black dress, black pantyhose and black heels, with requirements for "length, style and fit of the dress." Boys must wear black pants, black tie, white button down shirt and solid black shoes. Boys are not allowed to wear earrings or other visible jewelry. Girls can wear small earrings.

Lacey says students should be able to choose whether to wear pants or a dress. 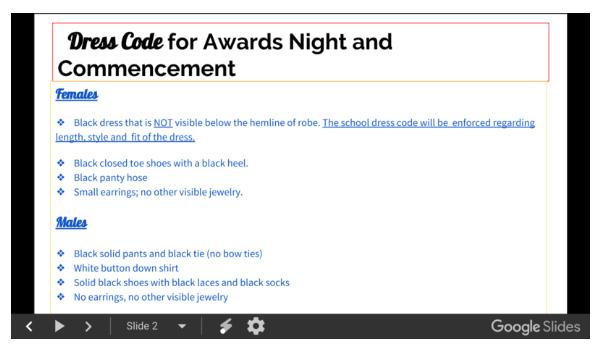 "Female students, in particular, face what most would call a sexist dress code," Lacey wrote. "In investigating this issue, we found reports from as far back as 2006 where female students in Cumberland County have been speaking out against the practices we are still seeing today."

A spokesman for Cumberland County Schools said they are still finalizing attire guidelines for the 2019 graduation season and will provide guidance to schools.

Lacey said she received an email from her principal, Daniel Krumanocker Jr., earlier this week. He thanked her for reaching out and said the dress code is being reviewed.

"(We have) taken your request seriously," the principal wrote, according to the email shared with WRAL News. "Today our school-level graduation adviser, senior class adviser and I met, reviewed the old dress code and we are preparing an updated dress code for the CPHS Graduation Ceremony and Senior Awards Banquet to meet all requirements."

Krumanocker did not respond to WRAL's request for comment.

Lacey said she was scared to start the petition because she feared backlash and repercussions. She decided to move forward, with her mother's support, and has since contacted the ACLU of North Carolina for help. An ACLU spokeswoman said they had heard from Lacey but have not decided yet whether to take on her case.

Lacey says she would like more than just the graduation dress code to change. She wants an overhaul of the school's overall clothing policy.

"As a young woman in 2019, the students expect freedom of dress and choice for their body, but instead, their bodies are over-sexualized and objectified," she wrote. "It is time for Cumberland Polytechnic High School to step into this century and remove these patriarchal standards for their students."

Her mother fully supports the petition.

"They can tell her to sit down and shut up all they want to, but that’s not going to happen," Kathleen Henry said.

In Wake County, the public school system has been working to adopt a more gender-neutral dress code. The change comes after many students, most of them girls, complained that the current dress code is outdated and targets female students.

Last year, a after a video about the school’s dress code showed only girls saying, "I will not wear athletic shorts" in unison. Also last year, a Catholic high school in Dearborn, Mich., suggested that female teens wear if their dresses were deemed inappropriate by teachers for prom.