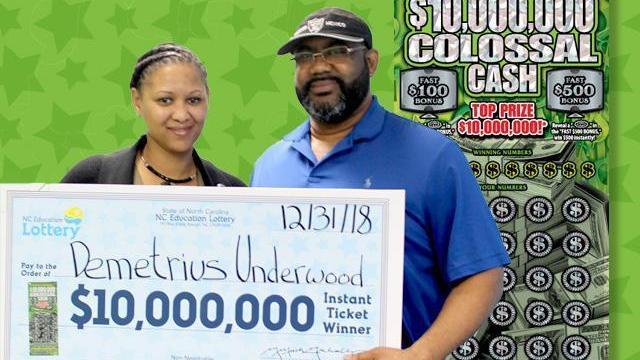 An Eastover man is the first person to win $10 million in the NC Education Lottery’s Colossal Cash game.

Demetrius Underwood bought his winning scratch-off ticket Saturday at the EPCO 3 Way Food Mart on Dunn Road, where he stopped to buy a Powerade.

Underwood said he typically buys the 13th ticket on a roll, but this time he also bought the 14th.

He didn’t win anything on the first ticket, but his second was a winner.

“I jumped out of the car and started yelling for my wife,” Underwood said in a press release. “We just didn’t believe it. We were speechless.”

Underwood chose to take a lump sum of $4.2 million instead of $10 million over 20 years.

He said he plans to use the money to pay off his mortgage and his wife’s student loans.