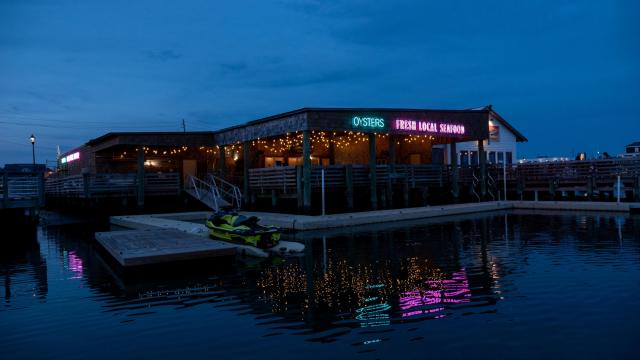 Peak season on the Crystal Coast stretches from June to August. Once fall hits, many tourists who crowded the beaches pack their bags and head home or back to school, and traffic on the coast slows down quite a bit. For locals, however, that doesn't mean recreational opportunities are gone — between the ocean and the sounds, residents find year-round opportunities for recreation and tranquility.

In Cedar Point for example, the town recently acquired a 56-acre plot of land located just off the White Oak River. Town officials have begun the transformation of the land into a park with direct river access, while also preserving the natural beauty of the tract.

"The way I think of this property is kind of like when New York City acquired Central Park — it's one of those things that you know that if you don't take the initiative and preserve it now, it will be lost forever. Someone will develop it, and you just don't get those opportunities back," said David Rief, Cedar Point's town administrator. "A lot of the park is designed to be in a conservation easement, so everything that will be in the conservation portion, which is the majority of it, will be left mostly natural. We're not putting baseball diamonds and big parking areas or anything like that out there. It will remain a more natural and pristine setting."

Currently, the park has a number of trails along the waterfront, as well as an existing pier that was damaged during Hurricane Florence. In addition to making repairs to the pier, Rief and his team also plan to install a kayak launch and add a few fishing piers and observation outlooks along the water.

While the town has future upgrades planned for the park, there's plenty for visitors to enjoy right now, including leisurely walks along the water, kayaking and fishing in the shallow river and wildlife viewing from the shore. Since the park is located at the intersection of the White Oak River and Boathouse Creek and is just off the Croatan National Forest, the park offers a rich array of birds and other wildlife.

"We have some osprey that have built a nest in our park. I've been out there and seen a dolphin teaching her young how to fish in the shallow water — you could actually see her dorsal fins stay above the water the whole time and the water scattering as she was chasing the fish. You name it, it's all out there," Rief said. "As far as fishing, there's a number of oyster beds, but once you get out a little ways, there's going to be mullet, bass, flounder, spots, croakers, drum and redfish. In the fall, the shrimp love it up in the creek."

Additionally, since the water is so clear and shallow, nighttime fishing brings a unique opportunity — one that can seldom be found anywhere else in the region.

"It's neat down here, you don't see it anywhere inland — but here we have flounder gigging," Rief said. "They're flat fish, so at night, they lay on the bottom, and you can go out in shallow boats along the edges of the beaches and shine your bright lights down into the water. You can see all of the different fish in there, and the flounder lay completely flat, because they think they're hiding."

"We have what they call a gig, which is like a little spear, at the end of a long stick," he continued. "Rather than getting them to bite your bait, you can gig them in a certain spot you don't destroy any of the meat — then you just pull them up and put them in the boat and pack them in a cooler for later."

Although the recreational flounder season has been shortened due to overfishing, there is still a six-week season in the late summer/early fall of 2021, which will run from Aug. 16 through Sept. 30. This is anticipated to be a popular time for visitors and full-time residents to enjoy flounder fishing, whether with traditional tackle or gigs. Once flounder season closes, the fall offers some of the best fishing of the year with many other recreational species abound.

Whether floating in the shallow rivers and sounds or deep in the ocean where blue marlin and other sportfish attract avid anglers, fishing is an integral part of the coastal lifestyle. While recreational and commercial fishing are still woven into the fabric of the communities that dot Carteret County, a new boating trend is quickly emerging: family time on the water. In fact, at the Radio Island Marina, owner Bill Newbern has noticed a significant shift in the boating demographic.

"The family dynamic has become increasingly more important to people, so the bulk of my customers are families. Yes, dad may still go fishing on the boat, but there's more to it now," Newbern explained. "On Saturday dad may go fishing, but then on Sunday, the entire family loads the boat down with chairs and floats, food and drinks, and the family will spend a full day cruising the waterways, pulling up on sandbars to have a picnic and visiting other friends anchored up."

The social culture of the boating lifestyle regularly fills shorelines with rows of anchored boats, as long as the weather permits. Newbern's full-service marina is conveniently located between Beaufort and Morehead City, so he and his team regularly see boaters pulling away for the morning, docking somewhere else for the day, and not returning to the marina until dinner time. In the summer months, many boaters head to local waterfront restaurants for dinner before calling it a day.

For those looking to get under the water, scuba diving in Carteret County is some of the best on the East Coast, and diving offers a unique experience for the whole family.

"In addition to having fishing that's some of the best on the East Coast, we also have excellent diving. We have reefs and a tremendous number of wrecks — since our waters are also known as the Graveyard of the Atlantic," Newbern said. "You will find that this has also become a family event. I raised both of my kids in the water, and we've done it all together. Diving is popular, and I will tell you that snorkeling has become popular too."

While wintertime offers fewer chances to congregate on the water, it brings new fishing opportunities — catches vary throughout the year — and owning a boat gives residents the chance to simply get out of their house for a while and enjoy the glassy waves.

"The winter offers some of our best weather for boating, unless it's frigid, and we don't usually get that cold down here. People will hop in their boats and go ride to fish or to just enjoy the natural beauty and tranquility of the offseason," Newbern said.

Added Rief, "We still see a lot of people kayaking in the winter. They'll get out there because the water is a lot calmer. In some places it's crystal clear. You can look down and see 10 feet deep and see the bottom just as clear as looking through a glass."

No matter the season or location, the recreational opportunities on the water in the Crystal Coast are unlimited — and for those who call the area home, there are plenty of hidden gems to look forward to year-round.

"There are places that we can go by boat that tourists either are scared to try, don't know exist, or just haven't had a chance to explore. There is so much water, and it is so diverse, that I think the sheer magnitude of it is what surprises people," said Newbern. "I've been here since 1989, and occasionally I'll take my boat in a different direction and just think, 'My God, I had no clue this piece of water existed or how beautiful it was.'"