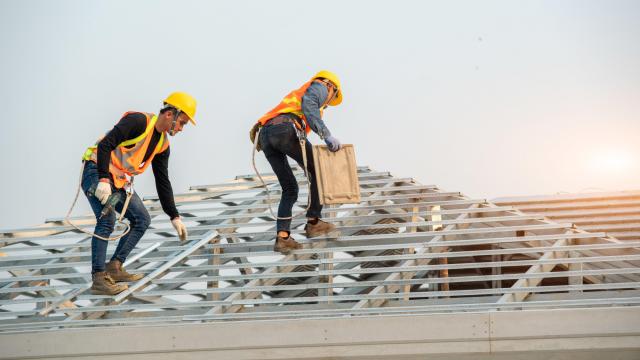 Over the past decade, the population of Carteret County has been steadily increasing with new permanent residents and vacationers, including many looking to buy a second home. With such significant growth in the area, demand has increased for more residential and commercial development, creating hundreds of new jobs on the Crystal Coast and surrounding area, including the Marine Corps bases at nearby Cherry Point and Camp Lejeune.

At Mechworks Mechanical Contractor, vice president Trapas Pratt has seen firsthand just how much skilled workers are needed and wanted in Carteret County.

"We have offices in Raleigh and in Greensboro, and all three of our offices are seeing the exact same thing — we could actually probably manage 25 percent more revenue out of every office. The problem is we can't find the skilled workers to do the work. We turn more work away here at the Crystal Coast than what we actually do," Pratt said.

He added, "We're one of six mechanical contractors that can bid mechanical prime work at Cherry Point and Camp Lejeune. There are different programs at those two bases that are general construction-related, but one of the largest is repair and rehabilitation work associated with Hurricane Florence, and we are struggling to find workers to allow us to bid on this work."

For Pratt, part of the issue with finding capable workers lies with a stigma around the construction business. Many young people feel a pull to go to college before entering the workforce, often writing off considering the possibility of entering a skilled trade instead.

Pratt knows exactly what that situation is like — he experienced it himself. While getting his degree for construction management, Pratt also worked 40 hours a week, but still ended up owing tens of thousands of dollars once he graduated. For his Mechworks colleagues that opted to go straight into the workforce, many were able to start making a very high salary by the time they were in their late 20s with no debt burden.

In order to encourage further learning and participation in skilled fields, Pratt and his colleagues have started offering courses of their own.

"I think there's a stigma for construction work because people don't really understand the commercial complexities and the talent that it takes to produce beyond the residential side— to actually install the boilers, the chillers, the air handlers," Pratt explained. "There are a lot of great initiatives going on. The workforce development board, the local community colleges — they're trying to get out there and do as much as they can to promote this type of career option and to offer specialized training."

He added, "That's one of the things that Mechworks is trying to do too. We're actually starting a Mechworks university where every two to three weeks, we're bringing our workers in on a Friday and putting a class on."

Pratt and his team at Mechworks aren't the only ones looking to attract skilled workers to Carteret County. At the beginning of this year, the Carteret County Homebuilders Association set a goal to improve workforce development, offering a number of classes and resources to aid in the effort. While COVID-19 threw a wrench in some of those plans, they have high hopes moving forward.

"We were just in the throes of working with the Salvation Army, which built a beautiful new building right in the middle of Morehead City that includes facilities that we can hold classes in — to provide basic skills classes as simple as how to read a tape measure, safety measures with saws and things like that," said Jennifer Lewis, executive director of the Carteret County Homebuilders Association. "We're now looking at how we can give people that are interested in developing some basic skills access to that in a virtual way."

She added, "We also have a website that we've been developing this year that our members can go on and post jobs. Our goal when we get this launched is to be able to communicate through social media and to connect with people from both inside and outside Carteret County who are looking for jobs."

As the Crystal Coast continues to grow, this type of skilled workforce is all the more needed — especially as the population requires more housing and commercial construction to satisfy community needs.

Currently, there are several large projects in the works, including multifamily complexes, new single family subdivisions, community college buildings, and multiple road and bridge projects. And of course there are numerous construction projects at Cherry Point and Camp Lejeune, which are scheduled to receive over one billion dollars in new construction appropriations in the next seven years.

"The need has definitely grown over the last few years — there's always been a need, but certainly more now as we're seeing accelerated growth. We have new residential subdivisions being developed, but we're also starting to see a great deal of remodeling. Especially over on the island, there's not a lot of property left to develop, so people are buying older homes and rebuilding or remodeling them," Lewis said. "The needs are everywhere — all the subcontractors that are involved in building a house, whether it's HVAC, plumbing, electrical or even landscaping. You never see the need go away here for this kind of workforce."

Echoed Pratt, "It's the electrical, the plumbing, the mechanical. Skilled tradesmen like pipefitters, ductwork installers and technical welders are hard to find. But we do continue to grow, and we need the boots in the field to continue that growth and be successful."

For both Pratt and Lewis, one of the major draws of working on the coast is simply being able to live so close to so much water. With year-round access to miles of shoreline, near-unlimited outdoor recreation and postcard views, the choice between working in Carteret County or a similar job further inland seems like a no-brainer.

"After college I moved to Raleigh and I was there for 10 years before I moved back. Honestly, I had an office job and I would've probably either had gray hair or a heart attack because I was so pent up at the traffic and the rat race — I was much better served being able to drive over a bridge and see the beautiful Crystal Coast," Pratt said. "I manage all three offices, and I get asked all the time from guys in my Greensboro and Raleigh office, 'Hey, when are you going to let me move down there and work for that office?'"

Added Lewis, "Some of my members post pictures of installing a roof on an oceanfront house — it's hard to argue that sitting on a roof of a house overlooking the ocean all day isn't a better atmosphere than overlooking the concrete jungle of a city."