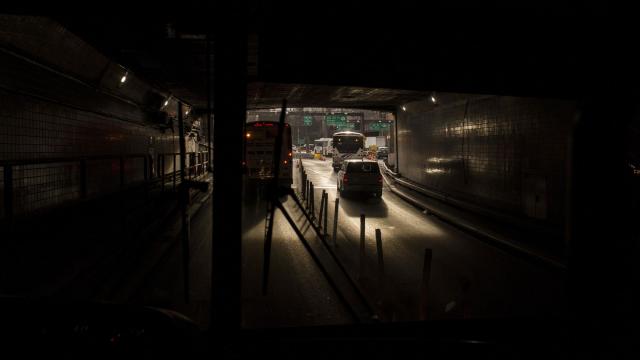 Talk to Leigh Weaver, who commutes by bus from Livingston, New Jersey, to midtown Manhattan, about what getting to work used to be like, and you will hear the all-too-familiar grievances about grinding traffic, suffocating crowds and cranky drivers.

But then in September 2016 she learned about OurBus, a new company willing to start a bus route in her area if enough people signed up.

“I was willing to do whatever I had to do to make this happen,” said Weaver, 43, a senior program manager for Google.

Commuting in the New York region has gotten decidedly worse in recent years, as infrastructure ages and more people travel to the city for work. Over the past 25 years, rail trips in and out of Pennsylvania Station have nearly tripled, and bus trips have increased by 83 percent, according to a 2017 Regional Plan Association report. More than 1.6 million people commute into the city daily, with 320,000 coming from New Jersey, the report found.

OurBus, which started in May 2016 with a route from Kendall Park, New Jersey, near Princeton, to midtown, is one of a handful of companies aiming to ease commuter stress by crowdsourcing rides and then developing apps that offer the routes in demand. Using available vehicles from existing charter bus services, it offers two routes from New Jersey to midtown and has plans to start a third one from Monroe later this year.

Another New Jersey company, Boxcar, started offering a similar service in response to the repair work at Penn Station last summer. In Manhattan, Chariot, a San Francisco-based shuttle service, began operating commuter vans last summer. These services are, in a way, larger and more complicated versions of ride-hailing apps like Uber or Lyft.

Once a route has been established, riders purchase tickets through an app, guaranteeing them a seat — so no more standing in the aisle, squeezed against other passengers. Vehicles come equipped with Wi-Fi. OurBus and Boxcar buses have bathrooms onboard and charging outlets next to the seats. And riders using Chariot and OurBus can track the progress of their vehicles on their phones.

“It seems so much more convenient for people to go to their phone and to be able to see when the bus is coming and then to be able to get on the bus and know that it’s a new bus and somebody is taking care of it,” said Dani Simons, a spokeswoman for the Regional Plan Association, a research and advocacy group for innovative approaches to transportation in the New York region. “That shouldn’t be so crazy. Public transit shouldn’t be miserable.”

But some transit advocates are skeptical. A poorly selected route or a half-empty vehicle could exacerbate congestion, said Jon Orcutt, the director of communications and advocacy at TransitCenter, a research organization. “Eventually they’re going to get stuck in the same traffic as the taxis,” he said. And while tech-savvy riders can swipe a request for a new route, neighborhoods with residents that are less tapped into social media and the latest apps might get overlooked, said Simons.

Establishing a new commuter bus route takes more planning than requesting a car share. Riders have to rely on dozens of other passengers agreeing to sign on, and the company has to establish a route, a process that can take months.

Weaver contacted OurBus after years spent riding Community Coach, a bus line owned by Coach USA. “I begged them to consider us,” she said of the first email she sent to OurBus in September 2016. Community Coach buses were often late, she said, broke down and were so crowded that they would sometimes pass her by, leaving her waiting on a cold suburban street corner with no idea when another one might arrive.

Scott Sprengel, a vice president at Coach USA, said that the company is aware of the issues. “We are proactively meeting with our customers to meet their demands,” he said. To address the crowds and the delayed service (not to mention the competition), Coach began testing online ticketing with a small group of riders last week. The company plans to expand online ticketing to all commuters if the pilot is a success, said Sean Hughes, a Coach spokesman. (Currently passengers must buy paper tickets from a clerk at Port Authority Bus Terminal in New York.)

Weaver, however, decided to take the lead herself. When members of a local Facebook group for commuters would post gripes, she would respond, urging them to request a new route on Ourbus.com. Last summer, after about 100 people requested the route, the company started one from Livingston to Port Authority, with stops in West Orange. Martz Group operates the buses.

“Night and day doesn’t even do it justice,” Weaver said of her new commute. “You almost get your life back.”

A ticket from Livingston costs $8.60 a ride, which is slightly less than what Community Coach charges ($9.60). Coach buses, however, come more frequently. And on a recent cold December morning, four Coach buses stopped at a West Orange, New Jersey, Park and Ride in the 25 minutes that a reporter waited for one Ourbus, watching the bus creep closer on the app (it arrived on time). While commuters filled the Coach buses, another line of riders dutifully waited for the alternative. Beth Fitzgerald, 61, a legal secretary who lives on 18th Street and First Avenue in Manhattan, regularly commutes by Chariot to and from her office on 43rd Street and Fifth Avenue. “Sometimes I’m the only one in the van,” she said. Fitzgerald loves the service, saying it has transformed her commute. She used to take two city buses, a trip that could take anywhere from 20 minutes to an hour. Now, her ride is consistently 10 minutes long, and the drivers handed out candy on Halloween. “It’s incredible,” she said.

Chariot, a startup venture that was acquired in 2016 by Ford Smart Mobility, sees itself as a bridge between the first and last mile of travel for riders whose subway or ferry stop might be just out of reach. “We’re bringing people back to mass transit,” said Ali Vahabzadeh, the chief executive of Chariot, which also operates shuttles in Austin, Seattle and San Francisco. Vahabzadeh sees the looming shutdown of the L train as an opportunity to step in. “It doesn’t have to be a doomsday scenario,” he said.

Some transportation experts believe that the focus should be on fixing the infrastructure that already exists. “We need to modernize the public transit system to the point where people are choosing to use it rather than searching desperately for alternatives,” said John Raskin, the executive director of the Riders Alliance, a transit advocacy group.

But commuters want relief. Consider Boxcar, which started last April as an app for commuters to rent daily parking spots near New Jersey train stations, paying around $6.50 a day. The company was a few months old when the Morris and Essex lines were rerouted to Hoboken during the so-called Summer of Hell. Seeing an opportunity, Boxcar partnered with charter bus companies to run buses from towns along the affected train line into midtown. When riders requested more stops in Manhattan, the company provided the service.

Even though the track work from last summer is finished and the trains are running again, many commuters now prefer Boxcar. So the company is continuing to offer two morning bus routes from outside the Chatham and Madison train stations. (With new track work having started this month at Penn Station, which has caused more delays and cancellations, Boxcar is “considering adding additional services” but has “not solidified any plans as of yet,” said Joe Colangelo, the chief executive of Boxcar.) At $12.99 a ticket, the Chatham-to-New York ride is more expensive than the $10.75 train fare. The company does not offer return bus service to New Jersey for the evening rush.

But Jennifer Rowland thinks the one-way commute in the morning is worth it. “I pay for the ease of the ride,” said Rowland, 49, a Boxcar rider who lives in Chatham and works for a media investment company in midtown. “I am a single mother of five children. There are so many reasons to be stressed out. Commuting shouldn’t be this hard.”