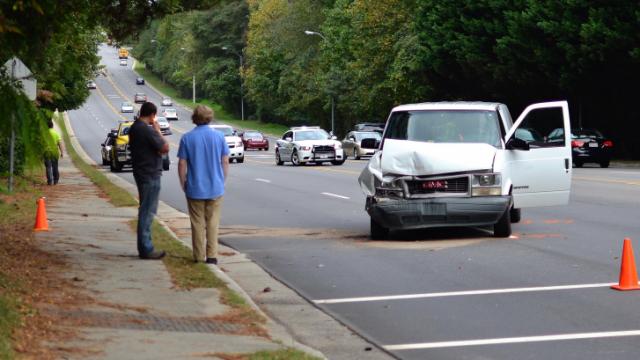 Tammy Hawkins, 53, was struck while in the crosswalk at Timber and Harth drives at about 4 p.m.

Hawkins was attempting to stop traffic on Timber Drive when a 2000 GMC Safari minivan driven by Aaron Vincent, 26, collided with a 2003 Volkswagen Jetta driven by Kathryn Truelove, 62. The Jetta, which was "stopped or almost stopped" for Hawkins, then hit the crossing guard, police said.

Hawkins was forced onto the hood of the Jetta, traveled on the car hood until the vehicle stopped, then was ejected from the hood and landed on the pavement, police said. She was taken to WakeMed, where she was listed Friday in good condition.

Vincent was charged with failure to reduce speed to avoid a collision.

Tracy Jones was walking her dog when she heard the crash.

Truelove was also transported to a hospital with non-serious injuries, police said.

The children the crossing guard protected were not hurt.