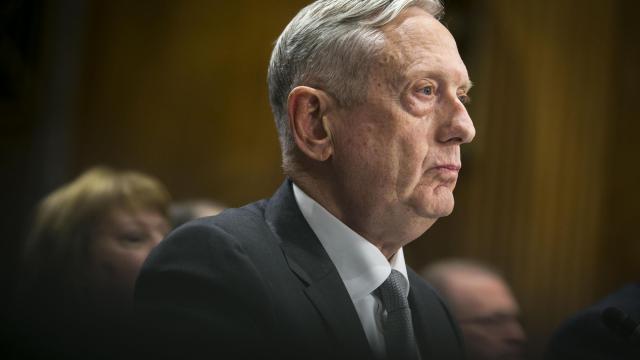 WASHINGTON — The Trump administration’s latest effort at banning transgender individuals from serving in the military amounts to what legal experts said is essentially a reprise of an all-too-familiar directive at the Pentagon: the 1994 “don’t ask, don’t tell” policy.

A slew of medical and legal professionals have already lined up against the newest White House order, issued late Friday night, which experts said may survive only if it is backed by the Supreme Court.

That order is based on recommendations outlined by Defense Secretary Jim Mattis in a Feb. 22 memo on the circumstances under which transgender people would be allowed to join or remain in the military.

The memo by Mattis disqualified all people “who require or have undergone gender transition.”

But he also recommended that, going forward, “transgender persons without a history or diagnosis of gender dysphoria, who are otherwise qualified for service, may serve, like all service members, in their biological sex.” Gender dysphoria is the psychological condition of a person’s discomfort with their biological gender.

The memo said that transgender troops who would be grandfathered into the system — under an Obama administration policy that allowed them to serve — could be discharged from the military if they continue to challenge the recommendations in courts.

Supporters of transgender rights said the recommendations echoed “don’t ask, don’t tell,” which was repealed in 2010 after 17 years of requiring gay men, lesbians and bisexuals in the military to keep their sexuality a secret.

“What they’ve basically done is said that if you have gender dysphoria, you’re out, with the exception of being grandfathered in, but if that’s used against them in court, you’re definitely out,” said Brad Carson, the former Defense Department acting undersecretary for personnel and readiness during the Obama administration.

“They’re also basically saying that if you just keep quiet, we’ll leave you alone,” Carson said. He suggested that inherent contradiction is where a legal defense of the new policy could fall apart in court.

Aaron Belkin, the director of the Palm Center, which focuses on sexuality and the military, said he expects to see more lawsuits filed, including those that will seek to use contradictions within Mattis’ memo as a basis for complaint.

In a report accompanying the new directive Friday, the Pentagon said that 8,980 service members who identified as transgender were currently serving, and that 937 of those people had been given a diagnosis of gender dysphoria.

Mattis has since refused to discuss the issue, leaving transgender service members in a state of uncertainty. On Tuesday, he declined to answer questions about the new policy because it is a matter of litigation.

“This is what we do in America,” Mattis told reporters at the Pentagon.

“Anything I say could jeopardize the purity” of the legal case, he said.

Already, President Donald Trump’s efforts to ban transgender people from serving in the military, underway since last summer, have been blocked in court.

There are at the moment at least four court cases challenging Trump’s original ban, announced in a series of Twitter posts in July. Federal judges have ordered that transgender people continue to be allowed to serve pending the resolution of lawsuits filed against the ban. Transgender recruits have continued to join the military, as well.

In November, the Pentagon approved a gender-reassignment surgery for an active-duty member of the military. That surgery came three months after Trump tweeted that “the United States Government will not accept or allow Transgender individuals to serve in any capacity in the U.S. Military.”

The president said he decided to issue the ban after consulting with generals and military experts, although Mattis was given only a day’s notice. Since then, the Defense Department has been scrambling to come up with an explicit policy that adheres to Trump’s tweet.

In his memo, Mattis cited “substantial risks” about military personnel who seek to change or who question their gender identity.

He said that allowing some of them to serve would amount to an exemption of certain mental, physical and sex-based standards, and “could undermine readiness, disrupt unit cohesion, and impose an unreasonable burden on the military that is not conducive to military effectiveness and lethality.”

Mattis’ assertion contradicts a 2016 study by the RAND Corp., which found that allowing transgender people to serve in the military would “have minimal impact on readiness and health care costs” for the Pentagon.

The study estimated that health care costs would rise $2.4 million to $8.4 million a year, representing an infinitesimal 0.04 to 0.13 percent increase in spending. It concluded that there were 2,000 to 11,000 active-duty troops who are transgender.

Citing research into other countries that allow transgender people to serve, the study projected “little or no impact on unit cohesion, operational effectiveness or readiness” in the United States.

In his recommendation to Trump, Mattis said the RAND study “heavily caveated data to support its conclusions, glossed over the impacts of health care costs, readiness, and unit cohesion, and erroneously relied on the selective experiences of foreign militaries with different operational requirements than our own.”

“In short,” Mattis concluded, “this policy issue has proven more complex than the prior administration or RAND assumed.”

On Wednesday, two former surgeons general described themselves as “troubled” by Mattis’ recommendations.