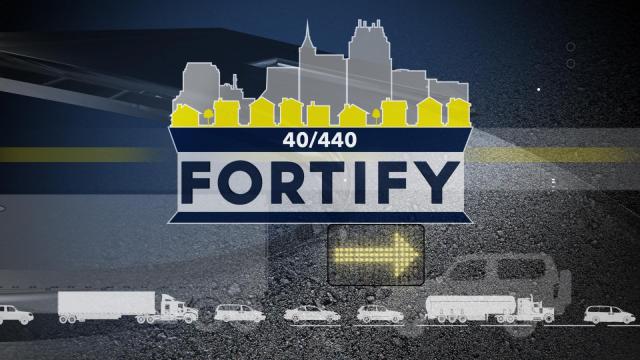 Raleigh, N.C. — The installation of lane closures associated with the Fortify road project on Interstate 440 were once again delayed by frigid temperatures this week, but Department of Transportation officials said Friday that work continues on parts of the project that don't require warmer weather.

Work on the Fortify project began in December, with lanes being reduced on I-440 West between the Interstate 40/I-440 interchange and Poole Road.

Since then, crews have battled numerous delays as they attempt to finish westbound lane closures to the U.S. Highway 64/264 split and then begin closing lanes on eastbound I-440 between U.S. 64 and the I-40/440 split.

If overnight temperatures warm during the coming days, crews will be able to complete westbound lane closures by the end of next week and begin coming back toward I-40 on the eastbound side. Officials said Friday that crews have only about 1,500 feet of closures left to set up in westbound lanes.

Weather hasn't slowed the construction of an asphalt plant that will be used throughout the duration of the three-year road rebuild on both I-440 and I-40. The plant, which will be located in the median near the I-40/440 split, is designed to increase efficiency and safety during the project and keep crews from needing to truck in materials from plants outside the work zone.

Crews have also been preparing to install a temporary bridge over I-440 East that will allow construction vehicles to move around the work zone without impacting travel lanes.

As soon as lane closures on I-440 East and West are installed, and orange barrels are replaced with concrete barriers, the big work begins.

Crews will work around the clock to cut out the interstate and rebuild it piece by piece.

Once that section of I-440 is replaced, the crews move on to the bigger piece of the Fortify project – replacing pavement on the stretch of I-40 that circles south of downtown Raleigh.

That work should begin early next year and continue into 2016.