Residents get out safely, 12 apartments damaged in Raleigh fire

Raleigh, N.C. — Fire ripped through apartments at the Village Green complex in Raleigh Monday morning, leaving dozens of people, many of them students at North Carolina State University, without a place to stay.

The fire started on a balcony, one witness told WRAL News. Video from Sky 5 showed the middle of one building largely gutted.

Firefighters were called to the community, on Thesis Circle, close to Dix Park and the Lonnie Poole Golf Course, around 9:30 a.m.

"We were sleeping, and someone started banging on our door," said Makayla Chavis, a North Carolina State University junior.

"My other roommate got up and opened the door, and he just started yelling, 'Fire!' I just grabbed my keys and ran out. It was so hot. I thought the fire was going to touch me. It’s crazy. It happened so fast," she said. 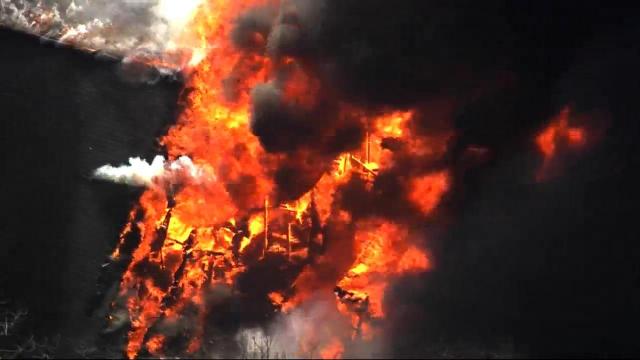 Flames shot from the roof, and dark smoke was visible to drivers on Interstate 40.

Resident Gage Ruiz said some of his neighbors thought that clanging smoke alarms were just a drill.

"There were people peeking out their door. We were telling them it’s actually a fire. Get out of the building."

By 11 a.m., most of the flames had diminished, and all residents were accounted for.

He was relieved to learn that no one was seriously injured.

"Material possessions are just that. They're replaceable, but people, human lives are more valuable," he said.

Forty-five students were directly impacted by the fire, and up to 95 people may be homeless because of water, smoke or structural damage. The Red Cross, apartment employees and N.C. State officials are offering help for the students impacted.

"We have a program called 'Pack Essentials' on campus, which is a program that helps connect students that are experiencing food, housing or financial insecurity and, certainly, something like this would cause all of those," said Mike Giancola, with N.C. State Student Ombuds Services.

Giancola said faculty were notified and will work with students impacted by the fire.

The majority of students will be placed in empty apartments within the Village Green complex, or they can move into campus housing.

Raleigh Fire Department officials said the fire appears to have been an accident, but they did not find out precisely what started it.