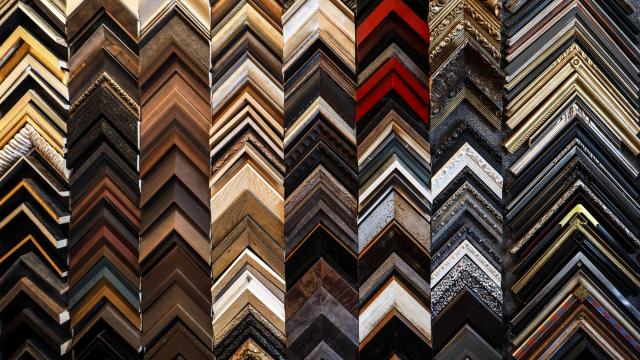 NEW YORK — Not a lot has changed at Make a Frame in Cobble Hill, Brooklyn.

There’s the same worn, wooden door that creaks when opened. The original tin ceilings remain intact. So, too, does the dedicated craftsmanship of its employees.

Since 1978, the store, in its landmark building, has been committed to creating custom frames.

The shop has taken on its fair share of oddities: a piece of the Hindenburg; cobra and alligator skins; Picassos; the Joker’s playing cards from “The Dark Knight;” and an original movie poster for “To Kill a Mockingbird.”

“Make a Frame is one of those places that’s becoming increasingly rare in New York,” said Stephen Powers, 50, an artist who works under the name ESPO and uses the store as his exclusive framer. “It carries a bit of patina and base. There’s legacy there, a comfort level, and a lot of institutional experience.”

Thoren Vadala, 39, who bought the business from its original owner in 2010, works as a framer himself.

“Thoren is the type of dedicated fabricator that has gone to people’s living quarters to get a feel for what frame he should use on clients’ artwork,” said Chris Kinsler, 40, an artist who recently sold half of his paintings that had been on display at the shop.

“The people who work here really love prints and art,” said Jim Rossman, 55, a regular since 1999. “They make you feel like it’s a collaborative process. It’s more than just a transaction. It’s that personal, friendly service and quality of the job.”

On a recent Saturday afternoon, a steady flow of customers filed into Make a Frame, each bearing something more exotic than the last: a hand-painted mandala; a radiant silk-screen print; a tapestry.

Inside the store, an eclectic mix of maps, mirrors and original film posters line the walls, all framed by staff members. The customers usually unravel their projects on a massive worktable at the front.

The framing process here is a communal experience, each employee rotating from piece to piece, suggesting new ideas like a group workshop.

“It’s very much a neighborhood feel,” said Dominick Leuci, 48, a designer and artist. “It feels like you’re almost in a small town. They nurture. They ask what kind of music you want to listen to. They want to talk it through and make sure everyone’s happy versus just getting you in and out.”

In addition to collaborating with customers, Vadala helps emerging artists like Kinsler gain exposure by showcasing their artwork in the store. If a piece sells, Make a Frame recoups the cost of the frame, plus 20 percent.

Kinsler’s exhibition featured images of the Minnesota Strip, a nickname for the area in Manhattan that had been rife with prostitution some 40 years ago. “It was ‘70s New York grime,” he said. “I usually do a whitewash frame, but Thoren suggested a raw wood. It’s still nice looking, but not finished or polished; it’s raw.”

Rossman has collaborated with the store on many unique projects, including one in which a frame was made out of wood from a barn in Texas. As chairman of the Brooklyn Historical Society, he also framed a digital copy of the Ratzer Map, one of the first detailed charts of New York City from the 18th century that the British used to invade the area.

Powers called framing an unsung profession, one blurring the lines between art and craft. The trade is difficult to perfect, he said, but the employees of Make a Frame aim to make strong design statements with their work.

“It’s something that now goes into a house,” he said. “It’s a moment where artwork becomes furniture.”