Crazy Tender Chicken in Only an Hour 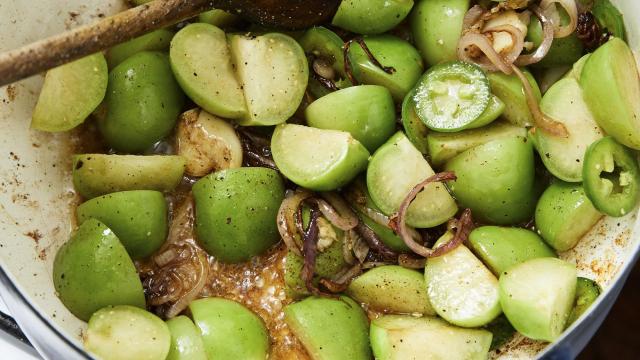 Many people assume, based on what I do for a living, that I must have an extraordinary kitchen full of the latest tools and appliances. The reality here is that I have cooked with the same beat-up Dutch ovens for years, have a stove that is basically an Easy-Bake Oven, and only last year decided it was time to buy a blender (that honestly I have used only once).

This is all partly because I am a true kitchen Luddite, believing you don’t need much more than the basics to create a great meal, but also because New York apartments aren’t known for their generous square footage, and every inch counts.

This means that no, I do not own a pressure cooker, Instant Pot, slow cooker, Crock-Pot or any combination of those appliances. Not because they aren’t smart tools that make millions of people very happy; I just don’t have the physical or emotional space for yet another thing in my kitchen.

So when it comes time to braise something until it’s falling-off-the-bone tender, I wait. Sometimes, depending on what’s involved, I wait hours (happily!).

But when I don’t have hours, I braise chicken thighs. Already beloved for their role in many a skillet dinner, chicken thighs are ideal for quick weeknight braising because of their ability to become tender in a fraction of the time it takes other meats to reach the same result.

As with any piece of meat, bone-in, skin on is the way to go here. “But why keep the skin if it’s not crispy?” I hear you. The skin still has tons of that good fat that will not only flavor the braise, but will also give it plenty of body and proper thickness. So hold onto it, won’t you?

Otherwise, you’ll find the usual suspects: loads of smashed garlic and half an onion to soften and sizzle in the fat (save the other half to use as garnish), fresh jalapeño, chicken stock and, one of my favorite braising ingredients, tomatillos. Much more acidic than its friend the tomato, the tomatillo also has an incomparable, luscious viscosity when it’s cooked down, thanks to high amounts of naturally occurring pectin.

While this dish is decidedly more saucy than soupy, you’re still halfway to an almost-pozole (the long-cooked Mexican stew typically made with pork and red chiles or chicken and tomatillos). So go ahead and add a can of rinsed hominy (beans or cooked rice also work) and garnish it as such, which is to say: all the garnish. Soft or crunchy tortillas, fresh cilantro, limey radishes and onions and the rest of that jalapeño, if you like it hot.

1 (15-ounce) can hominy, chickpeas or other beans, rinsed and drained (or use 2 cups cooked rice)

1. Heat oil in a large Dutch oven or heavy-bottomed pot.

2. Season chicken with salt and pepper. Add to pot, skin side down and cook, without disturbing, until skin has rendered most of the fat and is a nice golden brown, 8 to 10 minutes. (You want it to be very deeply golden brown so that it stays nice and brown as it braises.)

3. Using tongs, flip the chicken and continue to cook until nicely browned on the other side, another 5 or so minutes.

4. Transfer chicken to a plate or cutting board, leaving all the fat and golden bits behind. Add smashed garlic and half of the sliced onion. Season with salt and pepper and cook, stirring occasionally, until onion is softened and translucent, 5 to 7 minutes. Add tomatillos and half the jalapeño and season with salt and pepper. Add chicken stock and bring to a simmer. Reduce heat to medium and add chicken back in, skin side up (they will not submerge all the way; that’s fine). Simmer, uncovered, until tomatillos have completely broken down and the sauce has thickened, 25 to 30 minutes.

5. Add hominy and continue to cook until flavors have melded and the sauce has thickened enough to coat the back of a spoon (it should be looser than tomato sauce, thicker than soup), another 15 to 20 minutes.

7. Serve each piece of chicken with sauce spooned around. Top with radish mixture, some cilantro and tortillas alongside for sopping up all the goods.