Knightdale, N.C. — After two vehicles collide, drivers will typically share their information and the driver at fault arranges with their insurance company to pay the damages.

That wasn't how things unfolded on in the late evening of Jan. 1, 2019, for Tiare McFadgen, 26, and her boyfriend, David Dunston.

Dunston was driving her blue Honda and she was in the passenger seat.

McFadgen remembers it was dark and the road was wet as she and Dunston drove north on Knightdale-Eagle Rock Road.

As they approached a curve near Marks Creek Road, Wake County Sheriff's Deputy Janice Carter was headed south at 85 mph, according a police report. The report says Carter's lights and sirens were on, but McFadgen remembers only the light as they both approached a bend in the road. 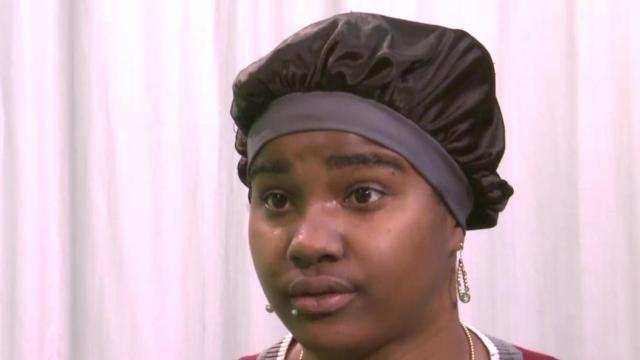 Dunston slowed down and pulled over to give the deputy's vehicle more room, McFadgen said.

Visiting the site for the first time since the crash, she could still see the tire tracks and car debris on the hill leading down to a roadside ditch.

Wake County Sheriff's spokesperson Eric Curry said that Carter is still out on medical leave due to a neck injury.

Dunston climbed out of the shattered driver side window with a fractured shoulder.

Both he and McFadgen still receive chiropractic care for neck and back pain.

McFadgen's car was a total loss.

From aggressive to passive, police chase policies vary in NC

McFadgen expected Wake County to pay for the loss of her car, for their medical bills and for "pain and suffering."

She hired a personal injury attorney who received a response from Wake County claiming the doctrine of "sovereign immunity."

The letter explained that "the county is not liable to pay damages resulting from its operations."

State and city law enforcement operations are also protected under those guidelines.

Sovereign or government immunity remains a legal tug of war in law enforcement crashes across the country.

McFadgen says that letter was enough to get her personal injury attorney to stop working on her case.

"Phff! Pretty much out of luck, I guess," McFadgen said.

She didn't know where else to turn with more than $4,000 in medical bills. Her vehicle was about to be paid off, but she didn't get the total value back.

"I was doing everything I was supposed to," she said. "My boyfriend was driving the speed limit, we had our seatbelts on, nobody was drinking and driving."

McFadgen now gets around in a rental car, which her car insurance covers.

"I still have to go and purchase a vehicle. I have school I've been missing," she said.

The county's "sovereign immunity" letter did offer McFadgen some compensation if the outcome of a thorough investigation fell her way.

The letter mentioned the possibility of waiving "sovereign immunity" and paying for "property damage and other expenses".

After 29 days, McFadgen received no news.

After McFadgen shared her story with WRAL News, we reached out to Wake County's Risk Management spokesperson Dara Demi.

On Jan. 30, the county said it completed an initial investigation.

"As a result the county has accepted liability for this accident," the county said. "We will work diligently, as we do in all such cases, to resolve any valid claims by following all applicable regulations and laws."

"It's good to hear," she said. "I feel relieved that I've heard back from them."

She said she also suffers increased fear and anxiety after the crash.

However, the county's initial letter explained that in no instance would they waive liability for claims of "pain and suffering."