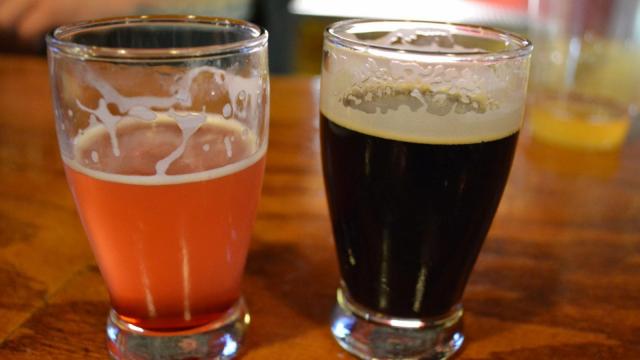 Raleigh, N.C. — Thanksgiving is just around the corner and supermarkets have all the ingredients for the big meal filling the aisles. Once you come up with a menu, your next thoughts might be about the beer you’re going to serve.

Most people gravitate towards wine because that’s always been the thing to do. The old “proper dinner setting” always had a glass for tea, soda or water and a wine glass for red or white wine set on the table. Well, it’s the 21st century now! We think craft beer is more appropriate.

Craft beer pairs with everything because of the great variety of styles and flavors that can complement any food and enhance both the food and the beer experience. Why not really impress your guests this year with a beer selection for every part of the meal. If you want to get ultra-snazzy, serve the beer in the appropriate style glassware!

Here are our NCBeerGuys suggestions on what beer to serve from breweries in the Triangle area - support local because local is best!

If you’re going to start with appetizers, it’s best not to bog them down with anything heavy. There’s a huge meal coming and this is just to kick-start your guests' palates.

If you have a nice cheese platter, it needs to have a beer that’s an even match for the cheese.

With cheddars, a good pale ale:

With Gouda, Havarti or Gruyere:

There’s a lot going on here and it’s no fun swapping beer with every bite you take. We’ll target the star of the meal - turkey.

A traditional roasted turkey with herbs and spices is well complemented with a Scotch or Scottish Ale. It’s even going to pair up with that nice stuffing you’re serving.

A smoked turkey demands a stout or porter to really accentuate the burnished flavors and smokiness of the meat. Give Gizmo’s Black Stiletto Stout or Double Barley Brewing’s Steak Cake Stout a try. For those who really like smoke, pairing a smoky beer with a smoked turkey is second to none! Mystery Brewing’s Thornfield’s End, Fullsteam’s Hogwash and Aviator’s Frostnipper are all amazing.

A fried turkey with seasoned injections like a cajun spice needs a nice hoppy IPA.

Desserts open a plethora of flavors with the variety of pies, tarts and chocolate treats. Don’t let your guests go for coffee now; beer will really enhance your desserts.

Apple Pie: Got a lot of sweetness going here, so let’s have some coffee flavor! Serve Big Boss’ Aces and Ates or Steel String’s No Quarter Coffee Stout.

Pecan Pie: Bring out the toffee and tame the sweetness with one of these - Double Barley Brewing’s Thrilla In Vanilla, Deep River Brewing’s 4042 Stout and Railhouse Brewery’s Vanilla Porter.

After a big meal, it’s time to relax. Some will break out the brandy but you can offer beers that are just as regal and, to us, taste better! When the goblets are brought out, these beers are perfect to be poured in them.

You want big, rich beers to sip on and close the night - go for the barleywines, tripels and Double IPA’s.

There are plenty of amazing beer choices in the Triangle. Make a statement at Thanksgiving dinner this year with these great craft beer pairing recommendations. A lot of the beers recommended are in bottles or cans but some are only available as growlers. Let us know about other beers you think would work well with this seasonal feast!

We'd love to answer “What local beers do you recommend?” with a solid “All of them,” but for now just consider our suggestions above and remember to “Drink Local and Keep Your Beer Dollars in North Carolina!”

Dave Tollefsen and Glenn Cutler are regular guys living in central North Carolina with their families who share a love for craft beer and homebrewing. They work together as the NCBeerGuys. They can be found online at ncbeerguys.com promoting North Carolina craft beer, providing information about the folks who produce local beer and writing about beer adventures, activities and events across North Carolina.