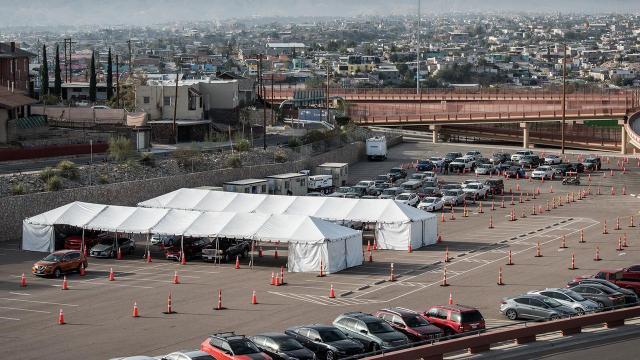 CNN — In less than 10 months, the US went from one known coronavirus infection to 10 million.

That bleak milestone was reached Monday, according to data from Johns Hopkins University. And the most recent 1 million infections happened faster than any previous million, in just 10 days.

The virus is now spreading exponentially in all regions of the country. As of Monday, 43 states reported at least 10% more new Covid-19 cases compared to last week, according to Johns Hopkins.

Track the virus in your state and nationwide

And with every surge in new infections comes new hospitalizations and deaths. More than 237,000 people have died from Covid-19 in the US, according to Johns Hopkins.

But amid the horrific trends, there's some good news on the vaccine front.

One vaccine may be 90% effective

On Monday, the drugmaker Pfizer said early data show its Covid-19 vaccine is more than 90% effective.

More than 43,000 volunteers had received either two doses of the vaccine or a placebo.

Pfizer said it plans to seek emergency use authorization from the US Food and Drug Administration soon after volunteers have been monitored for two months after getting their second dose of vaccine, as requested by the FDA.

That request could be made by the third week of November.

"But we need to wait until the results are there," Bourla told CNN Chief Medical Correspondent Dr. Sanjay Gupta.

It's not clear exactly when the vaccine might be publicly available to most Americans. But when it is, "the vaccine will be available for free to all American citizens," Bourla said.

'Pouring gasoline on a fire'

While America waits for a vaccine, coronavirus is raging at levels never before seen during the pandemic.

The US has averaged 108,737 new Covid-19 cases a day over the past week -- a new record high, according to Johns Hopkins.

The most infections ever reported in one day was on Saturday, with 128,412 new cases.

"Over the last week, about 23 states in all regions of the country reported record (new) cases," Walensky said.

"The death rates are high, and in fact they represent case counts from two to three weeks ago. So that's when we had case counts in the 60,000-70,000 range. So you can imagine what's going to happen in the weeks ahead."

And 19 states reported record-high Covid-19 hospitalizations over the weekend, according the Covid Tracking Project.

Emergency medicine physician Dr. Megan Ranney said the US is "heading into the very worst of this pandemic,"

"We're about to see all of these little epidemics across the country, crossed and mixed," Ranney said.

"It's going to be an awful lot like pouring gasoline on a fire," she said.

'We must ... avoid further devastation'

Of the 43 states where new cases soared more than 10% this past week, 10 states have seen increases of more than 50%: Hawaii, Iowa, Kansas, Maine, Minnesota, Nebraska, Oklahoma, Oregon, Vermont and Washington state.

No state has decreased the rate of new infections by more than 10% this past week.

Utah is one of many states cracking down with new mitigation efforts.

Gov. Gary Herbert issued an executive order Sunday declaring a state of emergency and issuing a mask mandate for all of Utah.

He also limited social gatherings to households only until November 23.

"Hospitalizations and ICUs are nearing capacity and healthcare providers will be unable to care for Utahns in the coming days if this surge continues," the governor's office said in a statement.

"We must take action now to protect our hospitals and healthcare workers and to avoid further devastation on our families, communities, and businesses."

Hydroxychloroquine doesn't help patients hospitalized with respiratory illness from Covid-19, according to research published Monday in the Journal of the American Medical Association.

It's the latest of several studies to find the antimalarial drug does not work on Covid-19, despite President Donald Trump's promotion of the drug.

In this study, a randomized trial involved 479 Covid-19 patients hospitalized with respiratory illness. Some received hydroxychloroquine, and some received a placebo.

The US Food and Drug Administration granted an emergency use authorization for hydroxychloroquine on March 28 after heavy promotion Trump and his administration.

After additional studies on hydroxychloroquine, the emergency use authorization was revoked on June 15.

In an editorial in JAMA, Dr. Michael Saag, a researcher with the Department of Medicine at the University of Alabama at Birmingham, said politicization was an important factor in promoting use of the drug.

"The clear, unambiguous, and compelling lesson from the hydroxychloroquine story for the medical community and the public is that science and politics do not mix," Saag wrote.

"The number of articles in the peer-reviewed literature over the last several months that have consistently and convincingly demonstrated the lack of efficacy of a highly hyped 'cure' for COVID-19 represent the consequence of the irresponsible infusion of politics into the world of scientific evidence and discourse. For other potential therapies or interventions for COVID-19 (or any other diseases), this should not happen again."