Daily coronavirus case numbers in the US are at levels not seen since the summer, and 14 states recently have set hospitalization records 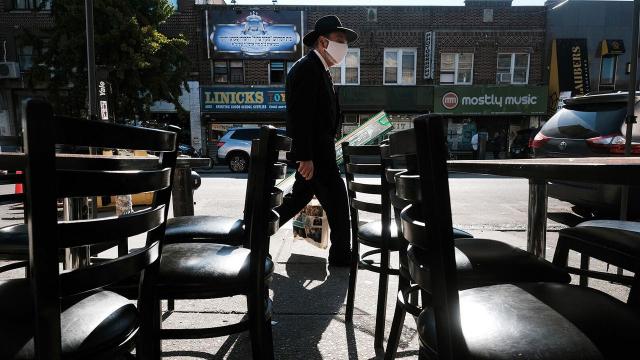 CNN — Daily coronavirus case numbers in the US are at levels not seen since the summer, and more than a dozen states set record highs for Covid-19 hospitalizations in the past week -- yet more evidence, experts say, of a difficult fall and winter ahead.

The country's seven-day average of new daily cases was above 58,300 as of Monday -- a level not seen since the first week of August, and climbing closer to the summer's peak of 67,200 on July 22.

Average daily cases have soared 70% since September 12, when the country was at a two-month low of about 34,300.

As cold weather is likely to drive more gatherings indoors, the case level appears too high to avoid dangerous levels of infections and hospitalizations in the coming weeks, experts have said.

"(With) the fact that we're only going to see more transmission occur with indoor air, people inside, this is going to be a rough fall," Michael Osterholm, the director of the Center for Infectious Disease Research and Policy at the University of Minnesota, told CNN on Tuesday.

Case rates and hospitalizations are rising especially in the Midwest, Great Plains and parts of the West.

The virus's prevalence is bad enough that the director for the National Institutes for Health says his family won't gather for Thanksgiving this year.

"It is just not safe to take that kind of chance with people coming from different parts of the country of uncertain status," Dr. Francis Collins told National Public Radio's "Morning Edition" on Tuesday. "The problem with this disease is it is so easy for people to be infected and not know it, and then spread it to the ones next to them without realizing it."

"All of this, I'm afraid, happens because we have not succeeded in this country in introducing really effective public health measures," Collins said.

"Simple things that we all could be doing: Wear your mask, keep that six foot distance, and don't congregate indoors, whatever you do, and wash your hands. And yet people are tired of it and yet the virus is not tired of us," Collins said.

The country has now topped 220,000 Covid-19 deaths, a number some experts worry may also begin to climb faster.

"The numbers are moving in the wrong direction," Dr. Tom Inglesby, the director of the Johns Hopkins Center for Health Security, told CNN Monday night. "We see that happening as the weather gets colder, and it's likely ... to get worse."

The United States likely will not have a Covid-19 vaccine authorized by the US Food and Drug Administration before late November, Collins told NPR on Tuesday.

That more or less goes along with with other officials' recent statements about the availability of any vaccine, as several candidates are in late-stage trials around the world.

"I would think it's very unlikely -- given the timetables and the standards that have to be followed -- that you will hear about an emergency use authorization before late November at the earliest," Collins told NPR.

"These will be vaccines that are tested with the most rigorous standards for safety and efficacy," Collins said. "If we get to the point by sometime, maybe the end of this year, where one or more of those is judged to be safe and effective, it will be because it's safe and effective."

US officials have said that if and when an emergency authorization is given for a vaccine, vulnerable populations, such as those in long-term care facilities, will be given first access.

"By the end of March, early April, we believe we will have enough vaccine produced to vaccinate anybody in the United States who wanted to get vaccinated," Azar said.

Once a vaccine is approved in the US, CVS and Walgreens pharmacies have been designated to help distribute free vaccines to long-term care facilities, federal officials have said.

But for the general population, "we're not going to have vaccines in any meaningful way well into next year," Osterholm said Tuesday.

Across the US, more than 31 states reported more new cases in the last week than they did the previous week, according to Johns Hopkins data.

In Illinois, the governor said that while the state remains better off than others across the Midwest, every region of the state "has started to move in the wrong direction."

"We can't wall off Illinois from the surge, but we can take extra precautions and do better than others at following the mitigations that slow the spread," Gov. J.B. Pritzker said Monday. "Let me reiterate what I have been saying for months, ours will not be one of the states that takes no action in response to rising cases, hospitalizations, and deaths."

In New Mexico, Gov. Michelle Lujan Grisham said Saturday the state was experiencing a 101% increase in Covid-19 hospitalizations so far this month.

On Monday, she tweeted if the virus "continues to exponentially spread like last week, New Mexico will not have health care and hospital capacity for every New Mexican who needs care."

And Mississippi Gov. Tate Reeves on Monday announced additional measures, including requiring hospitals to reserve capacity for Covid-19 patients as well as more targeted measures for several counties with a higher number of cases.

"I don't expect that any of these measures will eliminate the virus, and we have to allow for life to go on," the governor said. "In the meantime, as we wait for a vaccine, our mission is the same as it ever was -- it is to prevent our health care system from becoming overwhelmed."