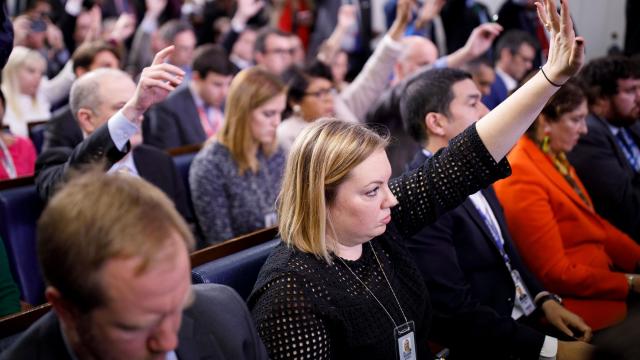 How do New York Times journalists use technology in their jobs and in their personal lives? Katie Rogers, a White House reporter for The Times, discussed the tech she’s using.

Q: How do President Donald Trump and Melania Trump use tech?

A: They’re an Apple couple. Both use their iPhones to interact with the outside world — sometimes to the chagrin of Donald Trump’s security advisers and critics.

The president is not as technologically savvy as the first lady. His aides slip him paper copies of news articles, and when he travels on Air Force One, an aide is often spotted carrying around these mysterious-looking cardboard boxes. They are full of paper documents. The president will often sift through the papers when he needs to refer to something — which can be where that famous Sharpie of his comes into play.

She keeps in touch with staff in person, but also through lots of email and texts. When planning events, she will do internet searches to find things she likes and then gives staff photos of what she wants, or draws things, with the Be Best logo being one example. She also uses email, text, phone calls and Signal to keep in touch with her contacts. Q: How have you seen White House tech evolve under President Trump?

A: I think moment-to-moment digital coverage of every single thing the president does is new with this White House. President Barack Obama had people tracking his movements through Twitter and beyond, but with this administration, journalists live-tweet, photograph and send video from pool sprays (brief Oval Office events) and Marine One departures, in addition to news conferences.

If I’m on the road, it’s easy for me to tune into a pool spray or speech through someone else’s Periscope live-streaming account, for instance. And when the president is at one of his properties, including the Trump Hotel or Mar-a-Lago, I often lurk on Instagram to see who is hanging out with him.

The Trump White House also had journalists switch over to an in-house Wi-Fi network, which made some reporters understandably uncomfortable for security reasons. The West Wing has also made more use out of devices that scan for gadgets including phones — I can understand why Signal is so popular. I think the anxiety over surveillance is perhaps more heightened than it was under the Obama administration, which, by the way, did its part to pave the way for these types of procedures.

Q: What are your most important tech tools for keeping up with breaking news from the White House and talking to your sources?

A: I’ve been on this beat since January. I thought I was pretty much tethered to the news before, but this job requires you to imbibe a daily tidal wave of news. So that’s fun.

A lot of my monitoring is Twitter-based, so I use tools I’ve relied on for years. I use Nuzzel, a social news app that lets me know what the people I follow on social media are sharing, which is helpful for identifying the stories getting traction. And I use Twitter’s list function to sort all of the noise into manageable buckets: I have lists of White House reporters, politicians, White House aides and Washington chatterboxes.

Outside of a few news apps, I dislike having notifications on my phone in general — my eyes tend to glaze over if I have too many — but I receive them from a few news organizations and whenever the president or his press secretary tweets. Several of my colleagues have the Apple Watch, which gives them a friendly little jolt when those tweets happen. I haven’t been able to bring myself to cross that particular Pavlovian bridge yet.

Living and working in Washington have a way of narrowing your perception, so I try to make sure I understand what people outside my bubble are talking about and reading. On my computer, I use Tweetdeck — which helps manage Twitter accounts — to display a list of prominent conservatives, which runs alongside a list of journalists. It’s interesting and instructive to see how the two worlds function in real time, especially when news hits.

This beat is competitive, and building it from scratch has meant using a lot of research tools — Nexis for phone numbers, Spokeo for social media accounts — and making a lot of cold calls and sending emails. (If I really need something, I’ll go to your doorstep.) I’ve also learned that calling from a blocked number leads people in the president’s orbit to believe the call is coming from the White House, so they answer right away.

I text or WhatsApp with my sources, and we often transition to Signal. With the caveat that nothing is perfectly secure, Signal encryption tends to provide peace of mind, especially since it comes with a function that allows messages to wipe out after a certain period. I have some sources who set their messages to dissolve after a few minutes, which has come in handy if they’re sending documents.

Speaking of security, I use two-factor authentication on everything, and LastPass to save my passwords, because I’m constantly forgetting what mine are.

Q: What could be better about some of these tools?

A: This is just a small thing, but you know how Snapchat will show you if someone screen-grabs your message? That would be interesting to have in Signal, but absolutely no one would use Signal if that function existed.

Also, Twitter can be a minefield of bad intentions and lost context. There is a performative aspect to being on that platform that I don’t enjoy. So since 2016, I have used a service called TweetDelete, which gets rid of my tweets that are more than a week old. I was sort of wistful when I saw my entire Twitter history wiped out and delivered to me in a spreadsheet, but I have no regrets.

Q: Outside of work, what tech product do you and your family love?

A: I wouldn’t say my husband and I are particularly tech savvy. We still enjoy having good old-fashioned squabbles over the thermostat, so we don’t have a smart home.

At home, I love having friends and loved ones over, so I use the NYT Cooking app to help find recipes to feed them. (I spent the fall perfecting an apple butter rugelach.) I love apps for travel, including Kayak, Hotel Tonight and Airbnb. And on my last vacation, which took me pretty far north, I downloaded Aurora Pro and Sky Guide to view the Perseid meteor shower.

Given the gig, I can have a hard time focusing or winding down, so I have been experimenting with meditation apps. I recently downloaded one called Happy Not Perfect. I used it at work the other day when I needed to focus on writing, and even though Maureen Dowd’s assistant was in the background yelling about a moose that got hit by a fast-moving car, I turned back to my piece refreshed.

Q: What tech product is on your holiday wish list?

A: Ugh. Probably an Apple Watch.