Court: Use our maps, not the GOP legislature's, in 2018 General Assembly races 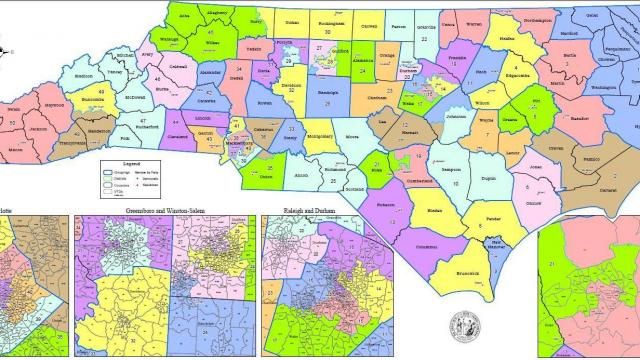 Greensboro, N.C. — A three-judge panel again set aside Republican-drawn maps on Friday, decreeing that General Assembly districts drawn by a Stanford University professor should be used instead for North Carolina's 2018 legislative races.

The unanimous decision is a victory for Democrats and left-leaning groups fighting a multi-pronged battle against the legislature's GOP majority. How long it stands remains to be seen. GOP leaders promised an appeal to the U.S. Supreme Court and, in a statement from House and Senate redistricting chairmen, called Friday's decision a shocking attempt to sow chaos in an election season that opens Feb. 12, with candidate filing.

Every seat in the state House and Senate is up for election this year, but Friday's decision keyed on nine districts, including four in Wake County. Just what the new lines would mean on Election Day remains to be seen, but the court's map would likely give Democrats a better chance of victory in some districts as they attempt to whittle away at the GOP's veto proof majority in both legislative chambers.

"This is big news for 2018 elections," state Rep. Graig Meyer, D-Orange, tweeted Friday. "The Special Master’s maps are more balanced. Dems are ready to go in these districts, with some amazing candidates."

Republicans argued that this special master, Stanford professor Nathaniel Persily, hired by the court to draw legislative districts "impermissibly drew the plan to favor the Democratic Party." But the judicial panel, made up of two Obama appointees and one from George W. Bush, dismissed that criticism.

"Rather, any adverse consequences on the electoral prospects of Republican candidates may simply derive from the Special Master’s duty to draw plans that completely eliminate the vestiges of the racial gerrymanders, rather than an intentional effort to benefit any candidate of either political party," the judges said in their 92-page order and memorandum.

This was actually the second redraw for these districts in the last year. The court brought in Persily to develop maps after plaintiffs in this case complained about the legislature's own redraw, which the court ordered after finding racial gerrymanders in more than two dozen legislative districts. The U.S. Supreme Court upheld that decision.

“North Carolinians across this state fought for fair districts," Allison Riggs, one of the Southern Coalition for Social Justice attorneys who brought this case, said in a statement Friday. "We hope that legislators respect the reasoned opinion of this court that this kind of race discrimination has no place in our democracy.”

Much of the GOP argument in this phase of the case centered on the legislature's constitutional authority to draw its own maps, and whether the court trampled on that by bringing in the special master. Lt. Gov. Dan Forest Tweeted Friday that the court's decision was "nothing short of judicial tyranny."

But the trio of judges said Republicans didn't deserve "a second bite at the apple," and that Persily's plan had "many marked improvements" over the one legislators submitted. Those legislative maps had been drawn by the same Republican hired gun, Tom Hofeller, who drew maps initially thrown out by the court. Plaintiffs argued that similarities in the maps, justified by Republicans as efforts to keep cities together and protect incumbent legislators, re-enforced racial gerrymanders in several districts instead of correcting them.

The judges found that compelling. Republicans said they specifically told Hofeller not to consider race in his redraw, but the judges decided that the new districts maintained "too much of the infirmity" of their predecessors. The judges pointed to a district in Fayetteville that seemed to purposefully exclude majority white precincts and one in Clinton that split a single precinct "on racial lines."

The judges also noted that one of the incumbents that legislators professed to protect, state Rep. Larry Bell, isn't actually running for re-election.

The case, Covington v. State of North Carolina, is one of several redistricting battles GOP leaders are fighting in court. Thursday evening brought them a victory in another of those cases when the U.S. Supreme Court said the state's current congressional map should be used in the 2018 congressional elections. That overturned a lower court's decision to require new maps within two weeks due to a partisan, as opposed to racial, gerrymander in the congressional maps.

These cases have been before separate three-judge panels, but there is one constant: 4th U.S. Circuit Court of Appeals Judge James Wynn, an Obama appointee who sits on both panels. Though Friday's decision was unanimous, the chairmen of the General Assembly's redistricting committees focused on Wynn in their joint statement.

“It is a shocking move for one of the same judges just reined in by a bipartisan U.S. Supreme Court less than 24 hours ago to again attempt to create chaos and confusion in an election process set to begin in just three weeks," state Rep. David Lewis and state Sen. Ralph Hise said in their statement.

The chairmen also complained of the vague federal rules legislators face in trying to draw election maps. They must satisfy the U.S. Voting Rights Act, which means drawing districts that minority candidates can win. But if they focus too much on race they're liable to see those maps thrown out as racial gerrymanders, and they can face accusations of packing minority voters into districts in an effort to lower their voting power in adjacent districts.

“The legislature has repeatedly asked this court to provide guidance," Hise and Lewis said in their statement Friday. "Contrary to our pleas and fresh off yesterday’s stinging rebuke from the high court, this panel has unleashed another bout of uncertainty that could harm North Carolina voters who are entitled to free and fair elections."