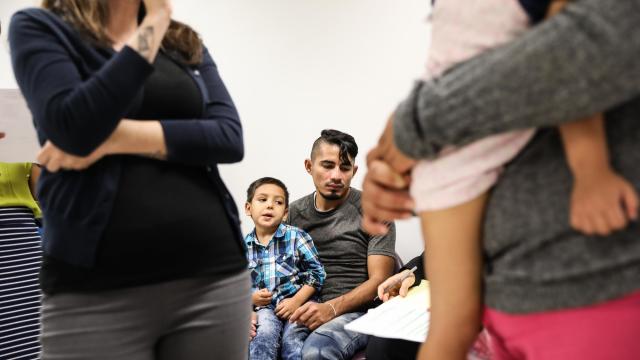 Among the first migrant parents to recover their children after they were taken by immigration authorities at the southwest border were 12 Guatemalans who disembarked jubilantly from a plane last week back in their home country. Immediately, though, there were questions: Had the families given up their right to pursue an asylum claim as the price for recovering their children?

In a court filing on Monday, lawyers for the American Civil Liberties Union said there are growing concerns that the Trump administration’s efforts to return more than 2,000 migrant children to their parents by July 26 to comply with a court order could be accompanied by attempts to carry out “mass deportations” once the families are reunited.

Lawyers for the civil rights group referred in their motion to “persistent and increasing rumors — which defendants have refused to deny — that mass deportations may be carried out imminently and immediately upon reunification.”

In an apparent attempt to head off any such concern, Judge Dana M. Sabraw of the U.S. District Court in San Diego on Monday temporarily blocked the government from deporting any families who had been separated by immigration authorities under President Donald Trump’s “zero-tolerance” policy on border enforcement.

ACLU lawyers said they were concerned that deportations could happen so rapidly after reunification that migrant families might not have enough time to understand their legal rights and might give up their right to pursue a petition for asylum.

The advocates were reacting, in part, to the stories of people like Celia Del Carmen Delgado, who said she initially agreed to deportation because an Immigration and Customs Enforcement agent in Texas told her that if she did, she would be reunited with her 3-year-old daughter, Adela. Delgado said she never spoke with a lawyer before she made the decision. But even after she agreed, her daughter was not immediately returned, she said. “When the moment came,” she said, “it was just me, and I said, ‘No.'”

When she was told she would be deported without her child, Delgado said, her whole body began to shake, and she had to be restrained by force. She said other mothers around her were fainting.

Some parents appeared to have been so overcome with anguish after being separated from their children that they were not sure what they had agreed to in order to get them back. Two fathers in New York originally told their lawyer, Mario Russell of Catholic Charities, that they had accepted deportation orders while they were in custody as a condition for the recovery of their children. But after their families were reunited, the fathers said they were unsure. Russell was trying to clarify with the government.

The one-week stay in deportations ordered by Sabraw came as the government was preparing to carry out large numbers of reunifications in the coming weeks, facing a July 26 deadline imposed by the judge for returning all eligible separated children to their parents. The government plans to transport up to 200 children a day in order to reunify them, according to a detailed plan filed last week.

Nearly all of the separated children, who are now housed in 106 locations nationwide, will be funneled into eight “staging locations,” the government said in court. The releases are expected to occur quickly, between six and 48 hours after a detained child has been approved for reunification.

“Defendants are devoting extraordinary resources to comply fully with this court’s orders, and to do so in good faith,” the government said in a legal filing.

But immigrant advocates worried that swift reunifications could lead to swift deportations, perhaps at the expense of due process. They also worried about misinformation. Before the court began overseeing the reunification process, many parents in immigration detention had been presented with a form, according to court documents, that suggested they had two options: be reunited with their children and deported or continue to fight their cases while remaining apart.

The plaintiffs added that families need time to consider together the “momentous” and “exceedingly complex” decision of how to proceed with their immigration cases. Normally they would have days or weeks to consider their options, but many have been separated for months, making those discussions difficult or impossible.

The decision came down at a heated status conference where Sabraw scolded the government once again for taking too long to vet parents before reuniting them with their children. “It is failing in this context,” the judge said. The government has pushed back against a more streamlined vetting process because of concerns that it could result in children being placed with adults who are not actually their parents or who have violent criminal records. Jonathan White, a senior official at the Health and Human Services Department, testified that some adults who have already been weeded out in the vetting process had criminal histories that included rape and kidnapping.

The government said in court Monday that its latest tally shows that 2,551 migrant children between the ages of 5 and 17 who have been separated from their families are in government custody. Of those, 1,317 have been cleared for reunification with their parents by the Department of Health and Human Services, though only about 300 as of Monday had approval for release from a second federal agency that must also sign off, Immigration and Customs Enforcement.

White testified that the parents of 71 children still have not been identified.

Sabraw said in court that the temporary stay on deportations must not delay family reunifications, and where necessary, the government needs to make sure there are places to accommodate parents together with their children. “That’s not an option,” he said. “If space is an issue, the government will have to make space.”