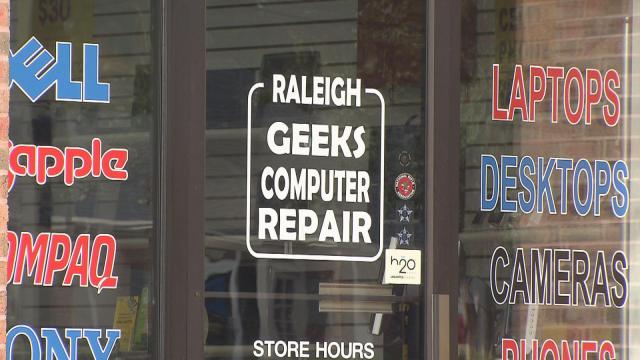 Judge Bryan Collins granted a preliminary injunction against Raleigh Geeks as part of a lawsuit filed recently by the state Attorney General's Office. The suit accuses the shops of deceptive practices.

Two of the three owners of the shops, Timothy Staie and Garrett Foster, are included in Collins' order, while the third owner, Steven Leo, remains under a temporary restraining order issued 10 days ago. State prosecutors said they believe Leo has left North Carolina, and they are searching for him to serve him with the lawsuit.

The shops have been the subject of numerous consumer complaints and were the focus of a 5 on Your Side investigation last October.

Customers said they paid in advance for computers or repair services and then got computers back in pieces, without original parts or, in many cases, got nothing back at all.

In addition to getting property back to customers, Attorney General Roy Cooper is seeking a permanent ban against questionable practices by the owners and managers, refunds for consumers and civil penalties.

"When consumers pay their money and entrust their property to a business, they expect to get what they paid for and get their property back,” Cooper said in a statement. “These computers need to be returned to their rightful owners as quickly as possible.”

A potential hurdle to getting computers and cellphones returned: The stores aren't open. The temporary restraining order blocked them from taking on any new business or payments from customers.

Cooper encouraged anyone who left items for repair at any Raleigh Geeks location to file a complaint with the state Consumer Protection Division by calling 1-877-5-NO-SCAM toll-free within North Carolina or visiting the division's website. He also suggested that consumers consider filing a police report reporting the property as stolen if it is not returned within five days.

Forty-five customers have filed complaints against Raleigh Geeks so far, including several in the past week, he said.